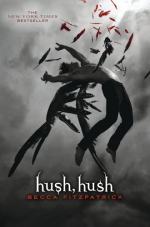 Becca Fitzpatrick
This Study Guide consists of approximately 36 pages of chapter summaries, quotes, character analysis, themes, and more - everything you need to sharpen your knowledge of Hush, Hush.

This detailed literature summary also contains Topics for Discussion and a Free Quiz on Hush, Hush by Becca Fitzpatrick.

Hush, Hush by Becca Fitzpatrick is a story about Nora Grey, a sixteen-year-old girl living in Coldwater, Maine. Nora lives in with her mother, Blythe, in an eighteenth century farmhouse located on the outskirts of town. The house, located on Hawthorne Lane, has no neighbors. Nora's father, an accountant, had been murdered in Portland the previous year and the house is the only remaining connection to him. His death has deeply affected Nora in many ways, including the fact that she often feels as if she is being watched. While Nora believes that being watched by her father should make her feel protected, it does not.

Nora is an average sixteen-year-old girl. She is worried about grades, fitting in, and the condition of her Fiat Spider. Boys aren't much of an issue until the she meets Patch and Elliot. Nora is much more focused on school and spending time with her best friend, Vee.

Patch Cipriano is a fallen angel posing as a high school boy. Nora describes Patch as being tall, dark and annoying, with black orbs for eyes. Nora leaves out the part about Patch's lean muscular arms, broad shoulders and seductive yet playful mouth because it makes her uncomfortable to think about him in that way. Elliot Saunders is a transfer student from Kinghorn Prep. Like Patch, Elliot has a sketchy past.

Patch is always by Nora's side, often saving her when bad things begin to happen. Nora is attacked on the highway by a masked man, another masked assailant attacks Vee after Vee dons Nora's coat, and more than one person breaks into Nora's house.

Nora is stunned to realize that she is the descendant of the Nephilim. Nephilim are a race of half-angels, half-mortals. Patch needs Nora because he desperately wants to become mortal. Killing Nora will allow him to do that.

The reader learns a lot about the legend of fallen angels and Nephilim. Although Patch knows he can become mortal by killing Nora, he can return to being an angel if he saves her life. There is a distinct war between good and evil.

An ancient Nephilim named Chauncey, aka Jules, is behind all the havoc and danger surrounding Nora. Nora manages to defeat Chauncey by jumping off a rafter in the high school gym, a move that would end her life. Patch gives into his love for Nora and saves her, giving up on his dream of becoming mortal but being able to keep Nora.

There is a great deal of paranormal activity in the story that prompts the reader to learn to suspend judgment of the logical. However, Becca Fitzpatrick is able to make it believable and enjoyable.

More summaries and resources for teaching or studying Hush, Hush.