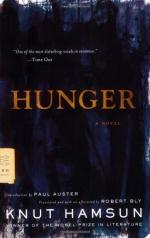 Knut Hamsun
This Study Guide consists of approximately 36 pages of chapter summaries, quotes, character analysis, themes, and more - everything you need to sharpen your knowledge of Hunger.

This detailed literature summary also contains Topics for Discussion and a Free Quiz on Hunger by Knut Hamsun.

In Hunger, the protagonist is a writer living in Christiania in the 1800s. Out of work, he struggles to write articles for the local newspapers to make a little money to feed himself. However, he ends up with no money for rent, and resorts to selling off his meager possessions to the pawn broker one at a time until he has nothing left. After experiencing manic highs and bleak depressions, he finally takes a job on a ship sailing away from Norway, to England, and says goodbye to his native land.

As the story begins, the narrator of Hunger is living in an attic room in Christiania. He has not eaten and has no food or money. His rent is due, and he is evicted from his apartment. He meets a woman who he gives a fantasy name, Ylayali, and fantasizes about. The narrator is saved at the end of the first part by a few hours of inspiration that lead him to write a story that is published for ten kroner. However, in exchange, the narrator has given up his home. He has no possessions and nowhere to stay.

A few kroner is a transient thing. The second part finds the narrator starving again and reduced to living in a workshop above a stable, abandoned because the snow comes into the building. The weather has turned cold, and the narrator's writing is going nowhere. After losing his keys, he is forced to spend the night in the jail as homeless, but he is turned out starving because he's lied about his position in life. At each avenue he tries, the narrator fails to earn or borrow money. Finally, a pawnbroker turns down his last possession, the buttons on his coat. During this part, the narrator is saved; not by his own work, but by an unnamed passing friend who realizes what a desperate situation the narrator is in.

In the third part of the novel, the narrator is poor and starving again. He continues to write, but his writings are rejected. He tries to buy a candle on credit, and the store clerk accidentally gives him change for five kroner. The starving man buys food that he can't keep down. In his euphoria, he talks to a woman whom he's seen hanging around his apartment, and he discovers that she is his "Ylayali." He walks her home and makes a date with her. However, soon the narrator is overcome with conscience and gives away his money. He is saved again when his editor gives him ten kroner, but on his date with Ylayali, she rejects him when he tells her the truth about himself.

In the fourth part of the novel, the narrator is living in a lodging house, but he hasn't paid rent for three weeks. He is trying desperately to write something worthwhile. His landlady kicks him out of his room and gives it to a longshoreman, forcing him to stay in a room with the landlady's large family, until she finally gets angry at him and kicks him out. The narrator receives ten kroner anonymously from Ylayali, which he throws in the landlady's face, leaving him still broke. Finally, the narrator signs onto a ship, leaving Christiania forever.

More summaries and resources for teaching or studying Hunger.