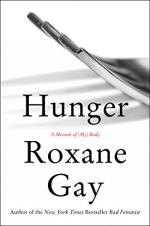 Hunger: A Memoir of (My) Body Summary & Study Guide

Gay, Roxane
This Study Guide consists of approximately 34 pages of chapter summaries, quotes, character analysis, themes, and more - everything you need to sharpen your knowledge of Hunger.

Hunger: A Memoir of (My) Body Summary & Study Guide Description

Hunger: A Memoir of (My) Body Summary & Study Guide includes comprehensive information and analysis to help you understand the book. This study guide contains the following sections:

This detailed literature summary also contains Topics for Discussion on Hunger: A Memoir of (My) Body by Gay, Roxane.

The following version of this book was used to create this study guide: Roxane Gay, Hunger: A Memoir of (My) Body. Harper Collins, 2017.

Gay begins her memoir by asserting that the memoir is not a triumphant one or a story about weight loss. Rather, she intends simply to tell “the story of my body” (4), which includes everything from eating and dieting to sex and sexuality. Her first anecdote is about sitting in the waiting room at a clinic with other potential candidates for a gastric bypass procedure. She ultimately decides against the procedure, but remarks that the experience of being briefed on the grotesque operation left her fearful and ashamed of her body.

Next, Gay moves on to discussing her childhood. She notes that she is the childhood of Haitian-American immigrants who maintained a relatively strict watch over their children. She was pressured to do well in school – and always did – and to live a life of modesty and moderation. She notes that her family typically ate healthy, well-balanced, Haitian-inspired meals and that her parents frowned upon overindulgence. Her meditations on her childhood introduce the traumatic gang rape she experienced at age 12, the event to which she traces the beginning of her struggles with eating and weight gain.

In the aftermath of her rape–about which she told no one–Gay attended high school at Phillips Exeter Academy, a boarding school in Exeter, New Hampshire. She explains that, even as she became more comfortable at the school, the trauma of her childhood still haunted her and she continued to battle her impulse to overeat and indulge. During her time in high school, she notes, she gained so much weight in such a small amount of time that her parents sent her to fitness camp and put her on a number of diets, all which helped her lose weight but did not combat the psychological struggle she was experiencing in private.

After high school, Gay notes that she attended Yale University, but dropped out after her second year and moved to Arizona to be with a man she had met on the internet. She refers to this period as her “lost years,” in which she worked for a phone sex line and lived in a number of different houses and apartments. These were also the years, Gay notes, that she began dating women. Eventually she moved home and began taking classes at Michigan Tech, where she received her doctorate in computer science.

Next, Gay develops a more critical tone as she reflects on her experiences within the context of America’s treatment of obese individuals. She notes the number of diets she has tried and criticizes shows like The Biggest Loser for their stigmatized portrayal of fat bodies. She explains some of her more quotidian battles like getting dressed in the morning, eating meals, and flying on airplanes, arguing that while the body positivity movement is making great strides in the media, large bodies are still alienated and scorned by much of society.

In the final section of the book, Gay transitions into describing her life now, as a well-respected writer constantly scrutinized during public appearances and obliged to represent larger communities of women, queer people, and minorities alike. She discusses why cooking for herself is difficult and why she has so much trouble entering into romantic relationships with people, continuing to trace her discomfort with her body back to the trauma she experienced as a twelve-year-old girl. The book ends with Gay asserting that while she is still not comfortable with her body, the act of writing the memoir is a way for her to assert herself as someone worth seeing, hearing, and paying attention to in a society that so frequently ignores or stigmatizes those who do not fit the physical image of female desirability.

More summaries and resources for teaching or studying Hunger: A Memoir of (My) Body .

Hunger: A Memoir of (My) Body from BookRags. (c)2022 BookRags, Inc. All rights reserved.