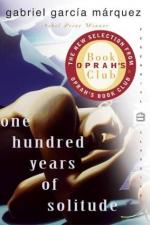 Introduction & Overview of One Hundred Years of Solitude

One Hundred Years of Solitude Summary & Study Guide includes comprehensive information and analysis to help you understand the book. This study guide contains the following sections:

This detailed literature summary also contains Bibliography and a Free Quiz on One Hundred Years of Solitude by Gabriel García Márquez.

In the mid-1960s, journalist and fiction writer Gabriel Jose Garcia Marquez was little known outside his native Colombia, having never sold more than seven hundred copies of a book. Everything changed, however, after he had a sudden insight while driving his family through Mexico. In an instant, he saw that the key to the imaginary village of Macondo he had been creating in short vignettes was the storytelling technique of his grandmother—absolute brick-faced description of extraordinary events. He turned the car around and drove straight home, where he proceeded directly to a back room. There he wrote while his wife, Mercedes Barcha, sold, mortgaged, and stretched credit to keep the family going. Gradually the entire neighborhood was involved in helping to bring forth what has since been recognized as a masterpiece. After eighteen months, a hefty tome of thirteen hundred pages was sent to the publishers. The result was Cien anos de soledad, later translated into English as One Hundred Years of Solitude. The first printings sold out before they could be shelved. Today, the novel has been translated into more than thirty languages and there are a number of pirated editions. The exceptional achievement of One Hundred Years of Solitude was highlighted in the citation awarding Garcia Marquez the 1982 Nobel Prize in Literature.

Often compared to William Faulkner's Yoknapatawpha County in its scope and quality, Garcia Marquez's Macondo is revealed in several of the author's short stories and novels. The most central of these is One Hundred Years of Solitude, which relates the history of several generations of the Buendia family, the founders of this imaginary Colombian town. Interwoven with their personal struggles are events that recall the political, social, and economic turmoil of a hundred years of Latin American history. In addition to establishing the reputation of its author. One Hundred Years of Solitude was a key work in the "Boom" of Latin American literature of the 1960s. Trie worldwide acclaim bestowed upon the novel led to a discovery by readers and critics of other Latin American practitioners of "magical realism." This genre combines realistic portrayals of political and social conflicts with descriptions of mystical, even supernatural events. Garcia Marquez is known as one of its foremost practitioners, although he claims that everything in his fiction has a basis in reality. Nevertheless, it is his inventive portrayals of his homeland which have made him one of the most acclaimed writers in the modern world.