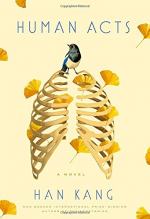 Han Kang
This Study Guide consists of approximately 47 pages of chapter summaries, quotes, character analysis, themes, and more - everything you need to sharpen your knowledge of Human Acts.

The following version of this book was used to create this study guide: Kang, Han. Human Acts. Hogarth, 2016.

Dong-ho is a middle school boy who wanders into the Provincial Office looking for the corpse of his best friend, Jeong-dae. There, he meets Eun-sook and Seon-ju, two girls who are volunteering to tend to the corpses. They ask Dong-ho to help them out, and the three soon become friends. In the main square, memorial services are carried out to honor the dead civilians.

One night, the army enters into the city, invading the Provincial Office. Even though Jin-su, one of the young men in the civilian militia, warns Dong-ho to go home to his family, he does not leave. He and a few other middle school boys are ordered to surrender to the army with their hands above their head. Dong-ho and the boys follow the instructions, but are shot down and killed.

The narration switches to Jeong-dae’s perspective after he has been killed. His body is piled up with hundreds of others and set on fire. Jeong-dae recalls the strange nature of being a soul stuck to one’s body after death. He is finally freed once the fire totally consumes his body.

The novel travels five years forward through time to 1985. Eun-sook is working as an editor in a publishing company, and she gets slapped seven times in an interrogation room, even though she has committed no crime and has no answers to help the police. She picks up a manuscript of a play from the ledger’s office, only to find that it has been severely censored. Later, she attends the play in person. The actors do not speak the words that were censored, but silently mouth them. Having read the manuscript dozens of times, Eun-sook is able to read their lips and recognize that they play is about Dong-ho’s death.

Five more years forward, the narrator takes the reader to a Gwangju prison in 1990. The prisoner explains the harsh beatings that he frequently received in the interrogation room, along with the minimal food and water that the guards provided for them. He reflects on his friendship with Jin-su, who was also held prisoner. Years after being released, they maintained their friendship, but struggled to deal with the pain of the past and became alcoholics. Eventually Jin-su took his own life. The prisoner frequently asks himself why he survived when Jin-su died.

The next chapter features Seon-ju’s experiences before and after working in the Provincial Office. As a young girl, she was part of a labor union and worked in a factory under inhumane conditions. She and several hundred other girls from the factory went on strike, and protested naked in the streets, under the impression that the police would not dare to harm bare, young girls. But the police brutally beat the girls, and Seon-ju was sent to the hospital. In 2002, she works in a small office as a transcriber for an environmental organization. Yoon, a professor writing a dissertation on victims of the Gwangju Uprising, contacts her and asks to interview her. She declines, unable to bring up the pain of the past once again.

In 2010, the novel shifts to the perspective of Dong-ho’s mother. Thirty years after the death of her son, she is still dealing with grief and loneliness. She remembers some of the most precious moments she shared with her son, and she reflects on his friendship with Jeong-dae.

In the epilogue, the writer, Han Kang, explains her connection to Dong-ho. Before the Gwangju Uprising, Kang and her family moved to Seoul. Her father sold their childhood home to Dong-ho’s father, so he ended up sleeping in the same bedroom in which Kang herself had slept. She remembers hearing about the violence unfolding through her parents’ hushed voices when she was a child. In the present moment, it is 2013 and she returns to Gwangju to visit her brother and do some research for the novel. She meets with one of Dong-ho’s brothers and he tells her, “Please write your book so that no one will ever be able to desecrate my brother’s memory again” (157). In the final scene of the novel, in a silent and somber moment, Kang visits Dong-ho’s snowy grave.

More summaries and resources for teaching or studying Human Acts.