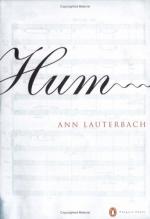 Ann Lauterbach
This Study Guide consists of approximately 23 pages of chapter summaries, quotes, character analysis, themes, and more - everything you need to sharpen your knowledge of Hum.

The poem 9/11, by Robert Pinsky, a former U.S. poet laureate, was commissioned by the Washington Post for the first anniversary of the attacks and was published on September 12, 2002. It is available at http://www.pbs.org/newshour/bb/poems/july-dec02/9-11_9-11.html from Online Newshour.

Frank O'Hara's Why I Am Not a Painter, from his 1965 collection Lunch Poems, is a breezy response to all of his admirers who wondered why he became a poet. As a founding member of the New York School of poets, O'Hara was greatly influenced by the contemporary art scene of the 1950s.

More summaries and resources for teaching or studying Hum.