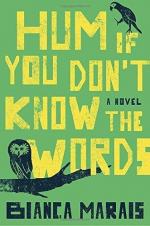 Hum If You Don't Know the Words Summary & Study Guide

Marais, Bianca
This Study Guide consists of approximately 102 pages of chapter summaries, quotes, character analysis, themes, and more - everything you need to sharpen your knowledge of Hum If You Don't Know the Words.

Hum If You Don't Know the Words Summary & Study Guide includes comprehensive information and analysis to help you understand the book. This study guide contains the following sections:

This detailed literature summary also contains Quotes and a Free Quiz on Hum If You Don't Know the Words by Marais, Bianca .

The following version of the book was used to create this guide: Marais, Bianca, Hum if You Don’t Know the Words, G.P. Putnum’s Sons, New York, 2017

The novel brings together two unlikely people from different walks of life, during the oppressive apartheid regime in 1970’s South Africa. These two people are nine-year-old Robin Conrad, a white girl from a middle-class family, and fifty-year-old Beauty Mbali, a Xhosa woman from a rural village in the Transkei. The action begins around the time of the 1976 Soweto Uprising whereby thousands of black school children came together to peacefully protest the introduction of Afrikaans as the main teaching language in schools. The police intervene, and many children were seriously injured and killed. Robin’s parents, Jolene and Keith, who have been out at a work party, are murdered in the wake of the carnage, while simultaneously, Beauty’s daughter, Nomsa, goes missing.

Robin, and her sister Cat (who is a manifestation of her imagination rather than a real person) move into their aunt Edith’s apartment and she becomes Robin’s guardian. Beauty receives a letter from her brother who has been housing Nomsa during her schooling saying that he believes Nomsa to be in danger. Beauty travels to Johannesburg in order to find Nomsa and bring her home. She leaves her two sons at home to tend to the village chores. After arriving in Soweto, she walks through the streets with are fraught with devastation and tries to help and comfort a number of injured children.

Edith and Robin have a mildly awkward relationship as Edith has never had or wanted children of her own. She is an air hostess who is something of a jet-setter and values her freedom and independence. Having to care for Robin creates an obstacle to this freedom but the pair struggle along together trying to make things work. Robin and Edith have a tacit understanding that if they do not speak of Jolene and Keith’s deaths, then neither of them will have to face their grief and sorrow. Meanwhile, Beauty and her brother, along with some other friends and neighbors, try to piece together what has happened and where Nomsa could be. It turns out that Nomsa was one of a group who organized the march and there is word that she will be going to Rhodesia to undergo military training with the MK.

As Beauty continues her search for Nomsa, she is directed to the home of someone known as the White Angel, a white English woman named Maggie who befriends and helps black people who are in trouble. She helps Beauty in her mission to find Nomsa as she has many influential contacts. Maggie sets Beauty up with employment as Robin’s nanny so she can stay in the city legally, and so that Edith can continue her job as an air hostess without leaving Robin alone. It takes some time for Robin to warm to Beauty, as she is getting over the sting of rejection of her old maid Mabel leaving her after her parent’s deaths. The pair soon become very close however, and Robin tries to use her surveillance and detective skills to help gather information about Nomsa.

Robin becomes friends with Morrie, a Jewish boy who lives in the apartment block, and a biracial janitor called King George, and together they embark on several missions to aid Beauty in finding Nomsa, without her knowledge. One day, Nomsa approaches Robin in a park and asks her to give Beauty a note detailing a meeting time and place. Robin promises to do so but soon thinks that if Nomsa and Beauty are reunited, then Beauty will want to go away to be with her daughter, and leave Robin alone. She decides to keep the letter from Beauty but Beauty finds it by coincidence and has a heart attack from emotional overload.

Robin sets off with help from King George and Morrie to find Nomsa’s friend Phumla who she thinks will know Nomsa’s whereabouts. They go to an illegal bar called Fatty Boom Boom’s shebeen and King George distracts Shakes, the man controlling Nomsa, while Robin tries to convince Phumla that she is trustworthy. She dances with a boy named Asanda in an attempt to prove her efforts to learn about different African cultures, and he tells her where Nomsa is. Robin and King George go to find her and tell her that the only reason Beauty did not go to meet her was because Robin did not give her the letter. Nomsa goes with Robin and King George to the hospital and she and Beauty are reunited. Robin desperately wants to go into the room to see Beauty but she knows that in order to rectify her wrong doings, she must allow Nomsa and Beauty to have this time together and that it does not concern her. Edith arrives at the hospital, elated that Robin is safe, and Robin realises that despite her flaws, Edith really does love her.

More summaries and resources for teaching or studying Hum If You Don't Know the Words.

Hum If You Don't Know the Words from BookRags. (c)2022 BookRags, Inc. All rights reserved.