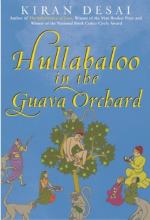 Kiran Desai
This Study Guide consists of approximately 40 pages of chapter summaries, quotes, character analysis, themes, and more - everything you need to sharpen your knowledge of Hullabaloo in the Guava Orchard.

Hullabaloo in the Guava Orchard Summary & Study Guide includes comprehensive information and analysis to help you understand the book. This study guide contains the following sections:

This detailed literature summary also contains Topics for Discussion and a Free Quiz on Hullabaloo in the Guava Orchard by Kiran Desai.

"Hullabaloo in the Guava Orchard," is a tale of a young man named Sampath Chawla who lives in the town of Shahkot, India. He is born on the night a severe drought ends when a ferocious monsoon sweeps over the region. Immediately following his birth, the Swedish Red Cross makes a food drop right in front of Sampath's house. The people in the community of Shahkot are convinced that Sampath is destined to be an important man. Not only does he bring on the much needed rain, he causes the Red Cross, flying over Shahkot, to drop food for the hungry people. Sampath's eccentric mother and demanding father are not so sure about their baby becoming a great man. To Kulfi, his mother, he is an odd looking alien with a large brown birthmark on his face.

Twenty years later, Sampath has not yet lived up to the prediction of greatness. In fact, he is anything but great. His father tries to counsel him on how he can get a better job or at least a raise in salary at the Post Office where he works. Sampath pays no attention to his father's advice. At the Post Office, Sampath spends hours alone, steaming open letters written to and from neighbors and by so doing, he learns a great deal about their personal lives and their secrets.

Not surprisingly, Sampath is fired after disrobing and mooning those gathered for his boss' daughter's wedding. Kulfi feels sorry for Sampath, with whom she feels a great connection, and gives him a fresh guava. After he eats it, he immediately feels energized and transformed. With no job and no prospects of one, his father is frantic and orders his son to immediately go job hunting.

Sampath has other ideas and decides to run away. He bolts off the bus to an attractive orchard he sees in the distance. He climbs a beautiful guava tree and decides that he belongs there. After discovering where their son is, the family tries to intervene and get Sampath to climb out of the tree and come home. Only Kulfi tells the others to let him be. Sampath announces he is staying in the tree. He becomes known as a great hermit who is wise and all-knowing. The citizens are convinced of his supernatural abilities when he alludes to private matters in their lives—information that he took, unbeknownst to them, from their own letters.

A great controversy develops about the monkeys who live in the guava tree with Sampath. The large monkeys attack people and often steal alcohol and get very drunk. The town officials are determined to rid the town of the monkeys but Sampath decides to save his lovely friends. How he saves them is both surprising and magical. When his father looks for him, he finds a large guava in his place with a brown mark on its skin. Sampath is able to save the monkeys and find a new home for himself; Sampath's dream to become part of the nature becomes a reality.

Hullabaloo in the Guava Orchard from BookRags. (c)2022 BookRags, Inc. All rights reserved.