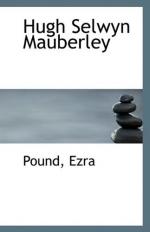 Ezra Pound's 1920 poem "Hugh Selwyn Mauberley" is a landmark in the career of the great American modernist poet. In the poem, Pound uses two alter egos to discuss the first twelve years of his career, a period during which aesthetic and literary concerns fully engaged Pound's attention. The poem reconstructs literary London of the Edwardian period, recreating the dominant feeling about what literature should be and also describing Pound's own rebellious aesthetic beliefs. The poem also takes us to the catastrophe of the early twentieth century, World War I, and bluntly illustrates its effects on the literary world. The poem then proceeds to an "envoi," or a send-off, and then to five poems told through the eyes of a second alter ego.

In the first section of the poem, Pound portrays himself as "E. P.," a typical turn-of-the-century aesthete, and then in the second he becomes "Mauberley," an aesthete of a different kind. Both E. P. and Mauberley are facets of Pound's own character that, in a sense, the poem is meant to exorcise. After composing this poem, Pound left London for Paris and, soon after, for Italy, where his view of his role as a poet changed dramatically. No longer would his work be primarily concerned with aesthetics; after 1920, he started to concentrate on writing The Cantos and on studying politics and economics. "Hugh Selwyn Mauberley" is not just Pound's farewell to London; it is Pound's definitive good-bye to his earlier selves.