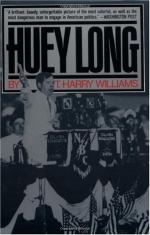 Huey Long, by T. Harry Williams, is the story of the Kingfish and Louisiana politics. Williams tells the story of Long, from his family's arrival in Louisiana until his death on Tuesday, September 10, 1935. He was shot in a corridor outside the governor's office in Baton Rouge. The young doctor who performed surgery on him missed the damage to a kidney. As a result, Long died several days later.

The story of Huey Long tells of an exciting chapter in the history of Louisiana and the country. From his humble beginnings on a Winnfield, Louisiana farm, Huey rose to national fame and was a United States Senator and aspiring presidential candidate when he died. His flamboyant style amused many people, but he drew crowds wherever he went.

Huey Long did not work within the Louisiana political machine known as the New Orleans Regulars and Rings. He built his own apparatus parallel to the existing structure, which he vowed to destroy. He very slowly amassed a power base throughout the state until he controlled the entire state political and legislative apparatus. He maintained this control even when he was a United States Senator and spent more time in Louisiana, working to have his programs enacted by the state legislature, than he did in Washington D.C.

The first office Huey was elected to was the Railroad Commission in 1918. He was a young lawyer at the time who had passed the bar by completing a few law school courses and spending a year studying. His service at the Commission made him known throughout the state as a champion of the people. This was also the view he had of himself and the way he wanted to be known. It was here that he began his life long battle against Standard Oil.

Huey lost his first bid for governor in 1923 when he was thirty years old. He made such a strong showing that he made it known that he was a future contender. He won the next election and became governor on May 21, 1928 and pushed through programs that he felt would benefit the people. Long was elected to the Untied States Senate in 1932, and continued his control of the state that continued to enact his programs.

This book is not the typical biography that people are used to. The author mentions that Huey and wife Rose had three children, but only two of them are named at various places in the book. The book emphasizes the Louisiana political scene of the time and Huey's role in it. It is fascinating reading for those who want to learn about this period in the history of Louisiana. The book is lengthy but well worth the reader's time.