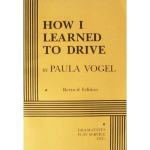 How I Learned to Drive Discussion Questions

Research some of the songs that Vogel suggests could be used in staging How I Learned to Drive and report on what you think makes them appropriate for using in this play.

Do you think that Li'l Bit and Uncle Peck would have developed a physical relationship if he had not given her driving lessons? Explain what there is about driving lessons that would lead to such intimacy.

At one point in the play, Aunt Mary notes that "The men who fought in World War II didn't have 'rap sessions' to talk about their feelings." Do you think that Uncle Peck's service in the war led to his becoming a child molester? Study what sort of psychological counseling is available to veterans today.