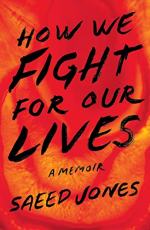 How We Fight For Our Lives Summary & Study Guide

Saeed Jones
This Study Guide consists of approximately 40 pages of chapter summaries, quotes, character analysis, themes, and more - everything you need to sharpen your knowledge of How We Fight For Our Lives.

How We Fight For Our Lives Summary & Study Guide Description

How We Fight For Our Lives Summary & Study Guide includes comprehensive information and analysis to help you understand the book. This study guide contains the following sections:

This detailed literature summary also contains Topics for Discussion on How We Fight For Our Lives by Saeed Jones.

The following version of the book was used to create this study guide: Jones, Saeed. How We Fight For Our Lives: A Memoir. Simon & Schuster, 2019. Amazon Kindle Ebook Edition.

As a young boy being raised in Texas by his single mother, Carol, Saeed knows he is attracted to boys from an early age. However, he quickly comes to associate being gay with the risk of dying from AIDS. Saeed has a crush on his neighbor, Cody, and is attracted to the men he sees in pornography, not the women. After hearing about a racist hate crime that resulted in the death of a black man not far from Saeed's hometown, he comes to associate his identity as a black, gay boy with the risk of violence and death. While visiting his grandmother in Memphis over the summer, their relationship deteriorates when his Grandmother forces her evangelical beliefs on him and she chides him for not being masculine enough. As a teenager, Saeed is approached by two older men with whom he engages in sexual activity. He does not come out to his mother, but she chastises him about his choices when she discovers that he has been having sexual conversations with older men on the internet.

Saeed dreams of attending New York University but, though he is accepted, his mother cannot afford the fees. Instead, he goes to Western Kentucky University where he has been offered a full scholarship. Before he leaves for school, his mother is hospitalized and diagnosed with congestive heart failure. She recovers, but her illness will continue to hang over them both. At university, Saeed comes out, first to his community at school and then to his mother who, after a series of questions, tells him she loves him and wants him to be happy. After his first sexual experience with a peer his own age, Saeed becomes very sexually promiscuous and adventurous. He pursues many sexual relationships and enjoys the power he gets from using his body as a tool for desire, particularly with straight-identified men. Amid his many relationships, there are three that stand out. One is with a man whom he calls the Botanist, who fetishizes and objectifies Saeed in a racist way and who uses racial slurs toward him when they are having sex. Saeed tries to use his sexual dominance over the Botanist to empower himself, but this is an unhealthy and damaging relationship that eventually causes Saeed to break down in tears. The second encounter is with a straight-identified man named Dane, who also uses racial slurs. Saeed represses his racist remark with alcohol and sex, again getting power from being desired by a straight-identified man. Thirdly, Saeed hooks up with a straight-identified and stereotypically masculine man named Daniel after a party. In the middle of their encounter, Daniel suddenly starts beating Saeed. Saeed recognizes Daniel's internalized self-hatred and struggles to recover from the trauma of this physical assault. Saeed uses writing, including a nonfiction essay and poetry to work through the trauma of this experience.

In 2011, Saeed is working as high school a teacher, having completed undergrad and an MFA in creative writing. He gets a sudden phone call from his Uncle Albert one day and learns that his mother is in the hospital in a coma. He rushes to be at her bedside and waits for her to recover. Sadly, it is soon clear that she will not get better and she passes away. With the help of Uncle Albert, Saeed plans his mother's funeral and takes care of the administrative business that surrounds the death of a loved one. Saeed is shocked when, after the funeral, he receives a substantial check from his mother's life insurance company. He laments all the things he and his mother could have done with this money when she was alive and struggling financially and feels awful that his financial freedom has been paid for with the loss of his mother's life. Saeed quits his job and moves to Harlem to be a writer full-time. He also decides to travel to Western Europe, knowing that his mother had wanted to see the world with him one day. In Barcelona, Saeed befriends a retired woman named Esther who is also traveling to deal with the grief of losing her own mother. Devastated and struggling with thoughts of suicide, Saeed's friendship with Esther helps him with his grief as they both recognize that "Our mothers are why we are here" (190).

More summaries and resources for teaching or studying How We Fight For Our Lives.

How We Fight For Our Lives from BookRags. (c)2022 BookRags, Inc. All rights reserved.