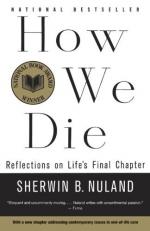 Sherwin B. Nuland
This Study Guide consists of approximately 31 pages of chapter summaries, quotes, character analysis, themes, and more - everything you need to sharpen your knowledge of How We Die, Reflections on Life's Final Chapter.

How We Die, Reflections on Life's Final Chapter Summary & Study Guide includes comprehensive information and analysis to help you understand the book. This study guide contains the following sections:

This detailed literature summary also contains Topics for Discussion and a Free Quiz on How We Die, Reflections on Life's Final Chapter by Sherwin B. Nuland.

How We Die is the story that identifies the characteristics, technically correct medical processes, and personal accounts of the seven terminus events that will result in being dealt the final hand. For the casual reader, these "Reflections on Life's Final Chapter" are understandably moving and emotional accounts of case studies on how we die. To the educated and aware, it is in Nuland's way an unsentimental journey through the methods and means by which people, young and old, will meet their end.

From the Acknowledgements to the Epilogue, How We Die, by Sherwin B. Nuland, demonstrates the intent of the author to converse with a reader who desires to know what it is like to die. The Acknowledgements read like a Who's Who of modern medicine. While Dr. Nuland acknowledges and credits his family, friends, coworkers, and those families and individuals whose accounts he tells here, he declares that this is his work. Drawn from almost half a century of personal and professional experience, How We Die is the book Sherwin B. Nuland claims comes from his soul.

There are six events are those required by law to be listed on a certificate of death. The seventh, old age, a felonious certificate entry in every state, is also included. Of the six primary causes of death, heart disease, murder, AIDS, and cancer are to be expected, self-inflicted death perhaps less so. Who would have suspected, though, that Alzheimer's is one of the major causes of death?

Beginning in Chapter 1 with "The Strangled Heart," Dr. Nuland gives considerable descriptive evidence to the cause and effect of these primary causes of death. For the unaware and inexperienced, the detailed characteristics of each disease and the pain of each dying process lend veracity to the words of Dr. Nuland. The accounts in each case study are derivations of personal experience. Personal observations are used to describe the events, as well as interviews of colleagues, friends, the individual being studied, or family members of the deceased.

A chapter entitles "Accidents, Suicide, and Euthanasia" provides the cumulative observations of death that is not the result of disease or over indulgence. Accidents leading to death, and suicide are similarly self-inflicted. Euthanasia requires the assistance of someone else to reach terminus. It is here the religious implications of how a person meets his end and the process of dying itself is first mentioned. Dr. Nuland does not propose or advocate any particular norm or expectation in the religious arena. He merely suggests that a person's religious beliefs may play a role in that person's final chapter. Accidents, suicide, and euthanasia are evidence of the critically ill or the mentally impaired individual taking control of his or her own end.

Chapters on AIDS and Cancer discuss the characteristics of each, the research, and the progress. Both are described as cataclysmic. Cancer is referred to as "The Enemy." Largely attributable to patient advocacy groups and very determined Doctors, tremendous gains have been made in the treatment of these two invasive diseases. Like Cancer, AIDS is an affliction that is not specific or predominant in an age group. Whether young or old, father or son or daughter, these devastating killers leave no exposed person immune.

In the chapter entitled "Hope and the Cancer Patient," the author describes the influence a physician's hope might have in the treatment, care, and candor displayed towards a patient. Dr. Nuland acknowledges his own weakness in the treatment of his brother.

It is in "Lessons Learned" and the Epilogue, Dr. Nuland reinforces his determination to be candid and upfront with the reader. He declares his intention to provide one with the knowledge to make educated and informed decisions regarding disease awareness and care.

The Dr. beseeches the reader to take control of his destiny and offers suggestions on how best to accomplish this by sharing with, or confronting the family physician. Use the knowledge gained from reading this tale on How We Die, Reflections on Life's Final Chapter, to renew an interest in the quality of one's life and demonstrate the wisdom to live every day to its fullest.

More summaries and resources for teaching or studying How We Die, Reflections on Life's Final Chapter.

How We Die, Reflections on Life's Final Chapter from BookRags. (c)2022 BookRags, Inc. All rights reserved.