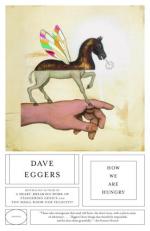 +Chapters Summary and Analysis
Another - Climbing to the Window, Pretending to Dance
She Waits, Seething, Blooming - Notes for a Story of a Man Who Will Not Die Alone
About the Man Who Began Flying After Meeting Her - After I was Thrown in the River and Before I Drowned
Characters
Objects/Places
Themes
Style
Quotes
Topics for Discussion
Order our How We Are Hungry: Stories Study Guide

How We Are Hungry: Stories Quotes

Dave Eggers
This Study Guide consists of approximately 19 pages of chapter summaries, quotes, character analysis, themes, and more - everything you need to sharpen your knowledge of How We Are Hungry.

"He feels tunneled, wrapped, dessicated. His eyes feel the strain of trying for too long to see in the dark" (What It Means When A Crowd in a Faraway Nation Takes a Soldier Representing Your Own Nation, Shoots Him, Drags Him from His Vehicle and then Mutilates Him in the Dust, p. 18).

"The horses had no symbolic value" (The Only Meaning of Oil-Wet Water, p. 32).

"The story is equally or more about surfing. People are no more interesting than waves and mountains" (The Only Meaning of Oil-Wet Water, p. 39).

The fact that he was alive to hear the suffering meant that he was meant to stop it" (Climbing to the Window, Pretending to Dance, p. 63).

"He had an aura that wasn't right, the wild glow of a scientist who'd discovered a formula that could kill millions" (Climbing to the Window, Pretending to Dance, p. 67).

More summaries and resources for teaching or studying How We Are Hungry: Stories.

How We Are Hungry: Stories from BookRags. (c)2022 BookRags, Inc. All rights reserved.