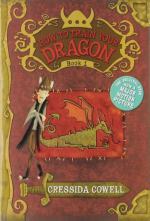 How to Train Your Dragon Summary & Study Guide

How to Train Your Dragon Summary & Study Guide Description

How to Train Your Dragon Summary & Study Guide includes comprehensive information and analysis to help you understand the book. This study guide contains the following sections:

This detailed literature summary also contains Quotes and a Free Quiz on How to Train Your Dragon by Cressida Cowell.

The following version of the book was used to create this study guide: Cowell, Cressida. How to Train Your Dragon. Hatchette Book Group, New York, New York, 2003. Kindle AZW file.

Hiccup Horrendous Haddock the Third is the son of Stoick, the chief of the Hairy Hooligan tribe. They are Vikings and the tribe as a whole respects only strength and brute force. Hiccup is a small boy who does not have the forceful personality that would normally be associated with a person of power in the tribe. He also lacks self-confidence. Although he knows that he is the son of the chief and that most people expect him to step up to his role in the tribe, he only wants to get through life without being completely ridiculous and without being killed. In Hiccup's mind, simply living through many of the daily ordeals of his life is equal to being a hero.

As the novel opens, Hiccup and nine of his peers are preparing to enter the dragon cave where the young dragons are sleeping off the last few weeks of hibernation. The boys are to climb a cliff and enter the cave as a group, and each boy is to choose a dragon, put it in a basket, and bring that dragon back out of the cave. Hiccup and his best friend, Fishlegs, fear they will fail completely. While most of the boys are planning to choose the most ferocious and respected breeds, Hiccup simply hopes he leaves the cave with a dragon, and any dragon will do.

Fishlegs is allergic to reptiles and he breaks out as soon as the boys are in the dragon cave. He chooses a reputable breed because he is tired of being ridiculed by the others, including a brash boy named Snotface Snotlout. But Fishlegs sneezes when he is trying to get his dragon, and wakes most of the 3,000 dragons in the cave. The boys have to scramble to escape and Fishlegs is devastated that he does not have a dragon. Hiccup gives Fishlegs his dragon and instinctively grabs another in the dark. When the boys emerge, Hiccup discovers he has a small dragon of indeterminate breed with no teeth. Over the coming weeks, the boys all work on training their dragons. While most rely on yelling as loudly as possible, Hiccup speaks Dragonese and looks for a way to actually connect with his dragon, which he has named Toothless.

Two tribes – the Hairy Hooligans and the Meatheads – join together for a celebration in which all the boys of Hiccup's age are to demonstrate that they have trained their dragons. Toothless taunts another dragon until a fight begins, resulting in chaos with all the boys failing the test. The rule is that all the boys are to be exiled from the village.

A storm delays the exile and some sea dragons wash up on the beach. They are huge and immediately pose a threat to both tribes. Thuggory, the son of the Meathead tribe chief, recognizes that Hiccup is the most likely to be able to come up with a plan to destroy the sea dragons. Hiccup does lead the boys in a plan, though there are some tense moments. At the end, one of the sea dragons swallows Hiccup but Toothless flies up the dragon's nostril, prompting a sneeze that ejects both Hiccup and Toothless. By the time Hiccup recovers from the ordeal, the members of the tribe recognize him as a hero, though not the traditional kind of hero who succeeds through brute strength.

How to Train Your Dragon from BookRags. (c)2022 BookRags, Inc. All rights reserved.