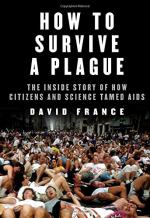 How to Survive a Plague: The Inside Story of How Citizens and Science Tamed AIDS Setting & Symbolism

David France
This Study Guide consists of approximately 48 pages of chapter summaries, quotes, character analysis, themes, and more - everything you need to sharpen your knowledge of How to Survive a Plague.

Acquired Immune Deficiency Syndrome (AIDS) is a disease caused by the HIV virus that attacks and debalitates a patient’s immune system, allowing opportunistic infections to cause sickness or death. AIDS was first observed in the late 1970s and was particularly prevalent among, though not restricted to, gay men. Current medical technology allows most AIDS patients to live a relatively normal life.

Human Immunodeficiency Virus (HIV) is the retrovirus that causes AIDS. It was discovered by a team of French researchers in the early 1980s.

An Opportunistic Infection (OI) is an infectious disease that takes hold when a person’s immune system is otherwise compromised by, for example, AIDS. These infections are generally not harmful to those with health immune systems but can be fatal when the body’s natural defenses are not present. Finding treatments...

More summaries and resources for teaching or studying How to Survive a Plague: The Inside Story of How Citizens and Science Tamed AIDS.

How to Survive a Plague: The Inside Story of How Citizens and Science Tamed AIDS from BookRags. (c)2022 BookRags, Inc. All rights reserved.