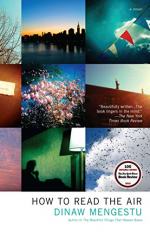 How to Read the Air Summary & Study Guide

How to Read the Air Summary & Study Guide Description

How to Read the Air Summary & Study Guide includes comprehensive information and analysis to help you understand the book. This study guide contains the following sections:

This detailed literature summary also contains Quotes and a Free Quiz on How to Read the Air by Dinaw Mengestu.

The following version of this book was used to create the guide: Mengestu, Dinaw. How to Read the Air. Riverhead Books, Penguin Group, Inc., 2010.

In the narrative present of How to Read the Air, first person narrator Jonas Woldemariam retraces his parents', Yosef and Mariam, honeymoon road trip from Peoria, Illinois to Nashville, Tennessee. Throughout his drive, he attempts to reconstruct the enigmatic beginnings of their marriage, looking to the drive for evidences of who they used to be, and who they ultimately became. As he moves along the same roads on which Yosef and Mariam traveled 30 years prior, Jonas finds himself recalling the evolution and dissolution of his relationship with Angela.

Ten years after earning a degree in English and writing, Jonas began working at a refugee resettlement center in New York City. His boss, Bill, valued Jonas because he believed his Ethiopian ethnicity made their refugee clients comfortable. Though his work at the center was often frustrating and bore little immediate reward, Jonas enjoyed editing asylum statements, feeling the responsibility tangentially related to his undergraduate degree. The longer he worked at the center, the more elaborate his editorial work became; he felt his embellishments of the clients' stories gave him a license to fabricate.

One summer, the center hired a series of temp workers, one of which was Angela. She and Jonas connected readily, their friendship evolving rapidly into an intimate relationship. After Angela began work at her new law firm, she and Jonas moved into together. Though the apartment was small, they merged their belongings and made the space their own.

In the narrative present, Jonas imagines his parents leaving Illinois. Jonas believes Mariam would have made Yosef wait in the car for her as an attempt to establish power in the relationship. On the road, angry with Mariam's behavior, Yosef smashed Mariam's head into the window. A tension formed between them along the remainder of the trip. When they arrived at Fort Laconte, Mariam imagined the possibilities of escaping her abusive husband once and for all.

Reflecting on his failed marriage, Jonas remembers how Angela grew increasingly worried about their finances after Jonas lost his job at the center. When her colleague, Andrew, found Jonas a part time teaching job at the academy, the couple felt temporarily stable, both monetarily and emotionally. Eventually they decided to get married and their disagreements dissipated. However, as time passed Jonas became complacent. Though he promised Angela the academy job would be temporary, that he would go back to school, and eventually earn a PhD, he made no moves towards pursuing these goals.

Angela grew increasingly frustrated, feeling Jonas was neither acknowledging her needs nor willing to confront the cowardly truth of his own interior. Not long after another argument and the seeming inevitable end of their marriage, Angela went to L.A. for work for the summer. While she was away, Yosef died; Angela rushed home to be with Jonas. She grew rapidly disillusioned, however, when Jonas failed to show any signs of grief in response to his father's passing. She then returned to L.A., giving up on comforting her seemingly heartless husband.

When Jonas reaches the fort in the narrative present, he feels closer to his mother than he ever has. Observing the landscape, he feels better able to feel what she must have been feeling. When he gets back in the car, he pauses on the side of the road and reimagines the car crash about which his mother told him briefly. So desperate to be rid of Yosef, Jonas imagines that she buckled herself securely to her own seat, surreptitiously unbuckled Yosef, and threw the vehicle off the road. After the car spun out, she ventured off onto the highway, imagining a future for herself and her unborn child apart from Yosef.

Thinking again of Angela, Jonas remembers Angela returning to New York. Not long after, he received a box from the YMCA filled with Yosef's last belongings. Inside, he was disappointed to find only a series of sketched images of boxes and boats. He did not tell Angela anything about the box, and spent the evening wandering the city. Back at work, Jonas told his students he missed a day of classes because of Yosef's death. He then lapsed into a long and mostly fabricated account of his father's life in Ethiopia and Sudan.

Though he was not spending class time teaching, Jonas was energized by the story, believing in its power to convey important life lessons to his students. So excited by the prospect of the tale, he went home and told Angela he was offered a promotion at the academy, a position he planned on taking for a semester before applying to graduate school. Though Angela was skeptical, she congratulated Jonas. In the weeks that followed, Jonas continued his story, relaying Yosef's trying days working on the docks in Sudan, where he met a friend and mentor Abrahim.

He told his students about the men's relationship, and all the important struggles they overcame together, all the lessons Abrahim taught Yosef about survival. One night after work, while waiting for Angela in the lobby of her office, Jonas encountered Andrew. Jonas lied and told him about his false promotion, a story which made its way rapidly back to the dean. When the dean called Jonas into his office, confronting him about the lie, Jonas denied it.

Anxious and frantic, he planned a spontaneous weekend getaway with Angela. Once out of the city, Angela tried pressing Jonas about his odd behavior, a dialogue that ended in a fight, and a final agreement that their relationship would not last. Not long after Angela and Jonas returned to the city, Jonas lost his job and he and Angela divorced.

On the road in the narrative present, Jonas imagines his mother lying in the ditch on the side of the road. The last time he saw Mariam, she told him how peaceful it was to lie there, about the dream she had of Yosef's death. Not long after, however, the paramedics arrived and found her. She did not end up escaping Yosef until Jonas left for college. Thinking of her while watching the midwestern sunset, Jonas is finally able to release his hold on his parents' memories. In the same moment he is also able to reconcile himself with his own ended marriage.

How to Read the Air from BookRags. (c)2022 BookRags, Inc. All rights reserved.