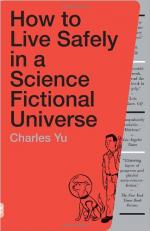 How to Live Safely in a Science Fictional Universe: A Novel Summary & Study Guide

Charles Yu
This Study Guide consists of approximately 38 pages of chapter summaries, quotes, character analysis, themes, and more - everything you need to sharpen your knowledge of How to Live Safely in a Science Fictional Universe.

How to Live Safely in a Science Fictional Universe: A Novel Summary & Study Guide Description

How to Live Safely in a Science Fictional Universe: A Novel Summary & Study Guide includes comprehensive information and analysis to help you understand the book. This study guide contains the following sections:

This detailed literature summary also contains Topics for Discussion and a Free Quiz on How to Live Safely in a Science Fictional Universe: A Novel by Charles Yu.

Charles Yu's debut novel, How to Life Safely in a Science Fictional Universe, could be described as a story about contemporary family life disguised as science fiction. It concerns a young man who has spent most of the past decade in a small time machine in his job as a time machine repairman. He makes calls on people who have rented time machines for recreational purposes but have become stuck in time and must be rescued by him. As the novel progresses, it is revealed that this man's name is the same as that of the author, Charles Yu. The protagonist is a lonely and rather sad fellow, who spends much of his non-working hours drifting along in his capsule, thinking about his past and his parents, especially his father who disappeared long ago. Accompanied only by his dog and a computer that has the pixilated face of a female and a cartoon-like voice, Charles hopes to one day locate his father in some alternate universe to which he apparently has traveled in a time machine. Charles's parents, a few clients, and several street performers are the only other humans that he encounters during the course of the story. He makes one trip to a city in Minor Universe 31, a residential and entertainment world made mostly from a science fiction "substrate," where the company for which he works is headquartered. His objective is to have maintenance work done on his time machine and when he goes to pick it up, he encounters his future self. Panicking, he draws his service revolver and shoots his future self in the stomach, just as his future self is attempting to tell him that the key is the book. He has no idea what this means as he stumbles into his time machine and races away. On the capsule's console, he finds a manual-type book that has the same title as the novel.

With the help of his computer, he realizes that he must read the book and make amendments and additions to it as he goes along. At some point in the future, he must give the completed book to his past self, who then will shoot him and begin the rewriting process again in an endless cycle. Charles realizes he has become stuck in a time loop. By the rules of time travel, if he changes anything that happens during this loop, he risks entering an alternate universe from which he might not emerge. Under the circumstances, escaping the time loop appears to be extremely difficult. He may be doomed to spend the rest of his life in the time machine, writing the book, giving it to himself, shooting himself, and starting the cycle again. The book is a manual about time travel, but it also offers advice on how such a traveler should live within or use time wisely. The main use of Charles's time is in thinking about his father and mother, but he begins visiting periods in his past in his time machine, watching his younger self interact with his parents. Eventually, he discovers that the book given to him by his future self is literally the key, because it holds a key that unlocks a box that his mother gave him, inside of which his father left clues to where he went in time. This inspires Charles to realize that he can break out of his time loop through the power of his mind and memory. He does so and rescues his father from the past time in which he is stuck. As the novel ends, it looks as if the family has a chance to regain normalcy and move forward with a better understanding of how to cope with the difficulties of life by facing the problems of the past with courage and honesty.

More summaries and resources for teaching or studying How to Live Safely in a Science Fictional Universe: A Novel.

How to Live Safely in a Science Fictional Universe: A Novel from BookRags. (c)2022 BookRags, Inc. All rights reserved.