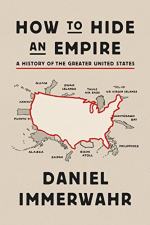 How to Hide an Empire Summary & Study Guide

How to Hide an Empire Summary & Study Guide Description

How to Hide an Empire Summary & Study Guide includes comprehensive information and analysis to help you understand the book. This study guide contains the following sections:

This detailed literature summary also contains Topics for Discussion on How to Hide an Empire by Daniel Immerwahr.

This study guide is based on the following version of the book: Immerwahr, Daniel. How to Hide an Empire. Farrar, Straus and Giroux. New York: New York. 2019.

How to Hide an Empire is a non-fiction book by Daniel Immerwahr telling the story of the United States as an empire. The book argues that the country’s imperial possessions—including the Philippines at one time, Puerto Rico, Guam, and others—have influenced the trajectory of the country’s economic and political power in the world. The book is broken into two parts, with the first titled “The Colonial Empire” and the second titled “The Pointillist Empire.”

Though the book moves seamlessly between the different locations within the American empire, it follows American history in a roughly chronological fashion. In the introduction to the book, Immerwahr recounts his belief that “the history of the Greater United States” can be told in roughly three acts: (1) westward expansion and the displacement of Native Americans; (2) acquisition of non-contiguous territories, including Alaska, Hawai’i, the Philippines, and so forth; and (3) the country’s decision, following the Second World War, to distance itself from empire. The book follows roughly this schema, focusing mostly on the second and third “Acts” described above.

In the opening chapters, Immerwahr reviews the debate surrounding westward expansion in the U.S, reminding readers that the map of the continental U.S. as it appears today was not always guaranteed. Immerwahr then shifts his narrative to a description of American empire abroad, a project that began almost immediately following westward expansion. In 1898, the U.S. fought against the Spanish empire, winning the Philippines, Guam, Puerto Rico, and access to Cuba. However, in his chapters on the first World War and on Woodrow Wilson, Immerwahr notes that the U.S. saw itself as a liberating force in the world and thus underplayed the significance of their territories. Wilson, a racist who saw colonized subjects as children, refused to entertain the possibility of independence and self-government for the Puerto Rican and Filipino people. As subsequent chapters suggest, the U.S. later spent a significant amount of time in the 1930s combating resistance and revolutionary movements on these islands.

Immerwahr then shifts to a description of the U.S. empire in the early years of the Second World War and in the aftermath. During this time, the U.S. voluntarily chose to abandon its territories, rather than hold onto them. Immerwahr explains that the U.S. made this decision in part due to the increasing resistance to colonialism among colonized subjects around the world, and in part due to the changing technologies available to them. Whereas empire once needed territory and land to secure its dominion, now the U.S. could pursue its economic and military interests without working to secure huge amounts of territory. This turning point is followed by a number of chapters on the reorientation of global products and languages around American standards.

In the final chapters of the book, Immerwahr shifts his sights towards the significance of the American empire’s isolated, and often unpopulated, islands and military bases, scattered around the world. Immerwahr argues that, while not colonies in a traditional, nineteenth-century sense, these bases and small swatches of territory were crucial to the U.S.’s power in the world. The book concludes with some commentary on the war in Iraq and Afghanistan, and a conclusion reaffirming the U.S.’s status as an empire in shape, even if not always in mentality.