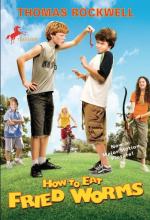 Thomas Rockwell
This Study Guide consists of approximately 33 pages of chapter summaries, quotes, character analysis, themes, and more - everything you need to sharpen your knowledge of How to Eat Fried Worms.

How to Eat Fried Worms Summary & Study Guide includes comprehensive information and analysis to help you understand the book. This study guide contains the following sections:

This detailed literature summary also contains Quotes and a Free Quiz on How to Eat Fried Worms by Thomas Rockwell .

When the novel begins, Billy, Alan, and Joe meet up after a failed adventure to steal peaches from Old Man Tator’s peach tree. Tom explains he couldn’t join in since he was grounded for not eating dinner – a salmon casserole. Billy explains that salmon casserole doesn’t sound so bad, which prompts the argumentative Alan to wonder what Billy wouldn’t eat. He asks Billy if Billy would eat mud or worms. Billy explains he would indeed eat worms, so Alan levels a bet. Billy must eat 15 worms in 15 days, for $50.

The rules are laid out. Tom will act as Billy’s second to ensure there is no cheating, while Joe will act as Alan’s second to ensure there is no cheating. The worms selected must be common worms, and may be prepared in any way so long as the worm is eaten. Billy agrees to the bet, knowing that winning $50 will help him purchase the minibike of George Cunningham’s older brother.

The day of the first worm arrives. It is boiled and coated in ketchup, mustard, and other condiments. Billy considers backing out of the bet at first, but Tom reminds him of the money involved. Billy successfully eats the worm, which worries Alan. Joe reassures Alan that there is no way Billy will win the bet.

The next several worms follow. At first, Billy has difficulty eating the worms, not because of the taste, but because of the thought that he is eating worms. He eventually moves past this, which further worries Alan. Alan explains to Joe that his father will be furious with him for betting, let alone losing $50 on a bet. Alan and Joe concoct a story that eating worms is poisonous, which worries Billy but does not convince him because Alan and Joe laugh while they explain this. That night, Billy has an upset stomach which in a panic he blames on worm poisoning. He tells his mother and father about the bet and eating worms, but his father assures Billy that worms are not poison.

With his father’s reassurance, Billy eats through the next several worms with ease. This causes Alan and Joe to panic, so they pull out all the stops. While they are away on a fishing trip for two days, they request that Billy’s mom ensure Billy eat the two required worms. They hope Billy’s mom will not allow him to do this, but their plan backfires. She creates a delicious European worm dish and a delicious ice cream worm cake for Billy to eat. When Alan and Joe return, they try gluing together a worm to make eating especially difficult, but Billy discovers the trick. They also bring Billy to Shea Stadium for a Mets game, stuff him with food and soda, and watch with glee as Billy falls asleep on the way home which means he will not eat his daily worm. At the last minute, Billy remembers he has to eat a worm, so enlists the help of Tom and Tom’s younger brother, Pete, to find a worm. Using a toy siren, Billy, Tom, and Alan wake up Alan and everyone on his block so Alan can see that Billy has managed to eat his daily worm just before midnight.

Alan’s father is furious with Alan and Joe for trying to trick Billy, and has Alan and Joe go door to door apologizing for the siren, and then tells them no more tricks. The boys end up getting into a fight which Alan’s father ends by reminding the boys they are all friends and need to get past the bet. Alan still tries a few more times to win the bet by locking Billy in a closet and giving him a fake worm, but these attempts fail as well. Billy ultimately wins the bet by eating his fifteenth worm. While Alan must work off the debt at a local store, Billy purchases his minibike and explains to Tom and Joe that he has come to like the taste of worms.

More summaries and resources for teaching or studying How to Eat Fried Worms .

How to Eat Fried Worms from BookRags. (c)2022 BookRags, Inc. All rights reserved.