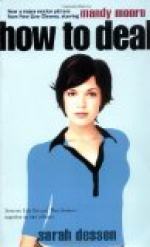 How to Deal: Someone Like You/That Summer Summary & Study Guide

Sarah Dessen
This Study Guide consists of approximately 58 pages of chapter summaries, quotes, character analysis, themes, and more - everything you need to sharpen your knowledge of How to Deal: Someone Like You/That Summer.

How to Deal: Someone Like You/That Summer Summary & Study Guide Description

How to Deal: Someone Like You/That Summer Summary & Study Guide includes comprehensive information and analysis to help you understand the book. This study guide contains the following sections:

This detailed literature summary also contains Topics for Discussion on How to Deal: Someone Like You/That Summer by Sarah Dessen.

How to Deal by Sarah Dessen is a compilation of two of her previous works - Someone Like You and That Summer. Each story is written from the perspective of a girl in her teens who has to come to grips with emotional and familial trauma. In each case, the young lady in question manages to overcome the emotional issues she is facing, generally gaining some insight about themselves in the process.

In Someone Like You, the main character, Halley, is called back from summer camp to be with her best friend Scarlett after an accident claims the life of her boyfriend. At Scarlett's house, Halley meets her alternate in Michael's life, Macon, and can hardly believe it when he shows an interest in her. As his interest deepens, and they spend more and more time together, Macon becomes increasingly obsessed with having sex with her. Halley puts him off again and again until she realizes that if she doesn't give herself to him - something he assures her is no big deal - she will lose him. She decides that New Year's is the right time, and goes to a party with Macon. He takes her upstairs to a room that is dirty, and so recently occupied by another couple that they haven't vacated yet. Leaving her there, she drinks more, and by the time he returns, she feels ill and wants to go home. Angry, he drives her back and gets them into an accident. Halley soon finds her self worth, and realizes that pressure from a boy should never be the reason that she gives up her virginity.

That Summer provides a similar scenario in which Haven is struggling to find herself. She is the youngest of a family that is changing. Her father has left to remarry a younger woman, her sister is days from her own wedding, and her mother is contemplating selling their home. All of these things come to head and Haven loses her composure. She blames her sister Ashley for being the catalyst to all the change. In Haven's mind, when Ashley said goodbye to Sumner, she began the series of events that led to the downfall of her family and their happiness. When Ashley finally reveals the real reason she left Sumner, Haven sees a new side of her sister. Ashley tells her a universal truth. The first boy is the one that hurts the worst. Haven realizes that her sister will always be her sister, though men in their lives may come and go, and that knowledge is comforting.

More summaries and resources for teaching or studying How to Deal: Someone Like You/That Summer.

How to Deal: Someone Like You/That Summer from Gale. ©2005-2006 Thomson Gale, a part of the Thomson Corporation. All rights reserved.