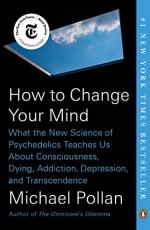 Related Topics
The Botany of Desire
The Omnivore's Dilemma: A Natural History of Four Meals

How to Change Your Mind Summary & Study Guide

Michael Pollan
This Study Guide consists of approximately 81 pages of chapter summaries, quotes, character analysis, themes, and more - everything you need to sharpen your knowledge of How to Change Your Mind.

How to Change Your Mind Summary & Study Guide Description

How to Change Your Mind Summary & Study Guide includes comprehensive information and analysis to help you understand the book. This study guide contains the following sections:

This detailed literature summary also contains Topics for Discussion on How to Change Your Mind by Michael Pollan.

The following version of this book was used to create this study guide: Pollan, Michael. How to Change your Mind: What the New Science of Psychedelics Teaches Us about Consciousness, Dying, Addiction, Depression, and Transcendence. Penguin Press, an imprint of Penguin Random House LLC. New York, NY. 2018. First Edition. The book is a first-person consideration of the history and experience of psychedelic substances in the Western Hemisphere, primarily in North and Central America. The author explores both history and experience from both objective and subjective perspectives, complementing what he discovers as a result of research with what he discovers as a result of his own consumption of psychedelics like LSD, psilocybin, and ayahuasca.

The narrative begins with a Prologue in which author Pollan offers a brief outline of what he has investigated, how and why those investigations are important, and the differing perspectives from which his writing is going to view the subject of psychedelics. Six chapters of narrative follow, considering that subject from scientific, historical, and personal points of view.

Chapter One focuses on what Pollan describes as a renaissance of the research into psychedelics – that is, the rebirth of investigations that had begun some decades earlier but which had been halted as a result of, among other things, public perceptions of psychedelics as dangerous. Chapter Two shifts focus onto the more personal, as Pollan details his experiences in search of personal experience with psychedelics which, he believes, will help him understand his subject more thoroughly. This sense, that understanding of psychedelics and what they can do can only come about as a result of personal experience, is a recurring motif throughout the book.

In Chapter Three, Pollan returns to his historical considerations of the research into psychedelics, and the impact of both that research and the substances themselves. He begins with examination of what he describes as the “first wave” of such research, which took place in the late 1950’s and early 1960’s; and of how that research showed significant promise, and had significant public impact (in part because of the experiences and influences of celebrities who had experienced degrees of awakening as a result of using these drugs). He also outlines how that public impact became negative and the promise of research came to an end as a result of the seemingly reckless, seemingly self-serving actions of noted researcher Timothy Leary.

In Chapter Four, the author again shifts focus onto his personal experiences, as he narrates his own experiences with other psychedelics – LSD, psilocybin, and a substance colloquially referred to as “the toad.” Then, in Chapter Five, the author returns his narrative and investigative attention to research – this time, contemporary research that supplements the subjective reporting of those using psychedelics with facts, figures, and statistics obtained as a result of technological observation and monitoring of things like brain waves and chemical function. Chapter Six takes these scientific considerations even further, examining the potential therapeutic use of psychedelics in the treatment of mental illnesses like depression and addiction. There are also considerations, in Chapter Six, of how the use of psychedelics can help persons with diagnoses of fatal illnesses overcome their fear of death.

The book concludes with an Epilogue, in which author Pollan outlines various ways in which his perspectives on psychedelics have changed, and ways in which investigation of their abilities and effects may continue into the future.

More summaries and resources for teaching or studying How to Change Your Mind.

How to Change Your Mind from BookRags. (c)2022 BookRags, Inc. All rights reserved.