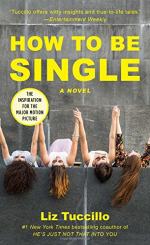 How to Be Single Summary & Study Guide

Liz Tuccillo
This Study Guide consists of approximately 63 pages of chapter summaries, quotes, character analysis, themes, and more - everything you need to sharpen your knowledge of How to Be Single.

How to Be Single Summary & Study Guide Description

How to Be Single Summary & Study Guide includes comprehensive information and analysis to help you understand the book. This study guide contains the following sections:

This detailed literature summary also contains Quotes and a Free Quiz on How to Be Single by Liz Tuccillo.

NOTE: This guide specifically refers to How to be Single by Liz Tuccillo, Pocket Books, New York, USA, 2008 (paperback). Also, this guide refers to each chapter by its rule number.

When Dale leaves Georgia for his samba instructor, Georgia turns to her friend, Julie, for help. Georgia is very emotional and needs a girls night out. Julie puts together such a night, inviting her friends Ruby, Alice, and Serena to join them. None of the women have ever met before. Knowing Julie is the only thing they have in common. Nervous about what to plan, Julie enlists the help of Alice, a dating pro. The women end up at a bar called Hogs and Heifers,and the evening is quite eventful. Serena gets alcohol poisoning, and Georgia gets thrown out for dancing on the bar too long. As the women wait for Serena in the emergency room, Julie strikes up conversation with two French women. After hearing their stories, the French women tell Julie that American women have no pride. Julie decides to travel the world to compare single women and to learn about the single culture in different countries.

On Julie's travels, she falls in love with a married French businessman named Thomas. Thomas tells her he has an open relationship. The rule he and his wife have is that he must return home after two weeks. When he chooses to stay longer with Julie, his wife flies to China to force him home and to tell him that she is pregnant.

Meanwhile, Ruby, Georgia, and Alice go about their single lives back in the states. Watching Serena take her oath to become a swami is the catalyst that prompts each of the women to make a vow to herself. Ruby vows to focus on becoming a single mother. However, she backs out of artificial insemination at the last minute and decides to improve her mental health first. Alice vows to marry the next man she meets. Unfortunately, she is not in love with Jim. She loves him, but there is no spark that she thinks she should have in a relationship. After trying different things to make it work, Alice finally admits to Jim that she is not in love with him. Georgia decides to date younger men and enjoy her single time. Serena, upon taking a vow of celibacy, suddenly has more sex that she has in years, thanks to a handsome swami. As a token of his love, he ties a black piece of string around her ankle. Soon, she notices there are many women with this same type of string tied around their ankle. She confronts them and finds out that they are all happy to share him. Serena thinks sharing this man is the craziest thing she has ever heard. She quits the yoga center and gets her old job back as a celebrity chef.

Julie and her friends need time away from it all, so they all travel to Iceland. There, they plan an impromptu ritual to start a new life. They wrap their fears and past failures in a cocktail napkin and burn it, symbolically burning the failures that have been burning inside them.

More summaries and resources for teaching or studying How to Be Single.

How to Be Single from BookRags. (c)2022 BookRags, Inc. All rights reserved.