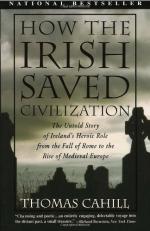 Thomas Cahill
This Study Guide consists of approximately 40 pages of chapter summaries, quotes, character analysis, themes, and more - everything you need to sharpen your knowledge of How the Irish Saved Civilization.

How the Irish Saved Civilization Summary & Study Guide includes comprehensive information and analysis to help you understand the book. This study guide contains the following sections:

This detailed literature summary also contains Topics for Discussion and a Free Quiz on How the Irish Saved Civilization by Thomas Cahill.

How the Irish Saved Civilization by Thomas Cahill shows how humane evangelists prepare in remote, Stone Age Ireland the corps of literate "White Martyrs" that reintroduce to medieval Europe eleven centuries of culture that fall along with the Roman Imperium. Without this effort, now forgotten outside Ireland, modern civilization would be markedly different.

How the Irish Saved Civilization first sets the background for the accomplishment by characterizing the late Roman Empire in the year 406 CE, as Germanic barbarians confront Roman legions on the Rhine. The Romans cannot conceive their way of life ending, for the core has stood nearly eleven centuries and it stretches around the Mediterranean and into Gaul and Britain. The hordes want only farmlands to feed their expanding population. Besieged in North Africa, St. Augustine of Hippo is the first of many high minds to ask why it is happening; while in Bordeaux, the life of the poet Ausonius demonstrates how inattentive Rome's nobility has become to the threat. At risk are eleven centuries of literature and philosophy, stretching back to fifth-century BCE Greece. Augustine's life shows the brilliance of the heritage and the grump, sex-obsessed turn he is giving to Western civilization.

Meanwhile, Ireland is shown to be an unholy, shifting "world of darkness" beyond Rome's gasp. The Irish prose epic, Tain Bo Cuailnge, is filled with lusty, brutal stories from the dawn of the island's prehistory, which is little changed by the fifth century CE, and, in fact, shows amazing continuity with the modern Irish character. Ireland's first encounter with its first evangelist, St. Patrick, a Romanized Briton, comes as he is kidnapped and enslaved. Over six years he grows from a careless boy to a visionary holy man, called to flee home. Once again in Britain, Patrick feels called by the "Voice of Ireland". He moves to Gaul to study for ordination, and as a bishop, he becomes "virtually the first missionary bishop in history".

For thirty years, Patrick helps the Irish "seize the everlasting kingdom". He ends the slave trade, decreases murder and intertribal warfare, but makes little headway with sexual mores. Outside Ireland, Patrick is little known and his church is ignorant of developments in the continent church, where Augustine's views are becoming the norm. Patrick sees the universe as a "Great Sacrament", with the events of Christ's life, the ranks of saints, and the powers of nature all playing a part. When Patrick dies in 461, the Roman Empire has fifteen years left and is in deep chaos, while Ireland is changing rapidly from chaos to peace, still cherishing the ancient virtues of courage, steadfast loyalty, and generosity.

Patrick's successor, St. Columcille, founds monasteries across Ireland before being exiled in 564 to Iona, offshore of Scotland. By century's end, sixty communities are founded in his name, and are filled with "literate druids". After Columcille's death, "White Martyrs" dressed like druids set off in all directions in imitation of his "glorious and heroic exile". Columbanus and twelve companions head to Gaul, where they "nettle" the local bishops; but over a span of twenty-five years, they found between sixty to one hundred monasteries, which return classical learning to Europe. At the same time, Pope Gregory I sends an envoy, Augustine, to England as Archbishop of Canterbury, and slowly, Rome's stricter version of Christianity spreads, eventually clashing with Celtic Christianity. The Synod of Whitby (664) shows minds reduced to myth, magic, and images.

Charlemagne is crowned king of the Franks on Christmas Day 800 and Europe's first renaissance begins, made possible by the ubiquitous "wandering monks". Their homeland, meanwhile, is looted and the monasteries burned. By the time the Vikings are defeated in the early eleventh century, Ireland has irrevocably lost the cultural leadership of European civilization. Conditions worsen under English occupation, particularly with the publication of the Penal Laws and the "Great Hunger", which causes two-thirds of the population to starve or emigrate.

How the Irish Saved Civilization from BookRags. (c)2022 BookRags, Inc. All rights reserved.