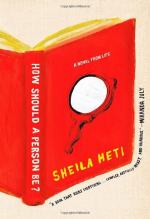 How Should a Person Be? - Act Four – Act 5 Summary & Analysis

Act Four, Chapter 1, Sheila Throws Her Shit – Sheila gets to work writing, illuminating parts of her own castle.

Act Four, Intermission – At the movies, Sheila runs into her ex-husband. She wonders aloud why people live their lives the way they do, for example imagining themselves to be tragic figures with tragic flaws responsible for pain. Her ex thinks it may be because otherwise, people would feel too discouraged to survive once they realized they were insignificant. Sheila thinks it may be because the truth is too hard to accept.

Act Five, Chapter 1, The Ugly Painting Competition – In an e-mail to Sheila, Margaux wonders if Sheila believes she is not a person because she thinks she has no effect on other people. Margaux explains she herself was worried about being recorded because she felt like it took away some of...

How Should a Person Be? from BookRags. (c)2023 BookRags, Inc. All rights reserved.