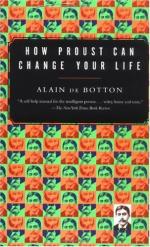 How Proust Can Change Your Life ; Not a Novel - Chapter 2 Summary & Analysis

Proust's father, Dr. Adrien Proust, was a well-respected doctor and the son of a provincial grocer who manufactured wax candles. Dr. Proust was especially concerned with public sanitation and consulted various governments on controlling infectious diseases such as cholera. He was internationally-renowned and died in 1903.

De Botton believes that Proust was intimidated by his father's accomplishments. Proust flirted with professions like a lawyer or stockbroker but could never summon up any passion for anything outside literature and writing. He spent five years as a librarian at the Mazarine library, but missed much time on sick leave, skipping out on work in favor of social gatherings and spending his father's money. Proust was fired at five years of not showing up to work.

After both his parents died, Proust began work on his masterpiece, In Search of Lost Time. He stated to...

How Proust Can Change Your Life ; Not a Novel from BookRags. (c)2023 BookRags, Inc. All rights reserved.