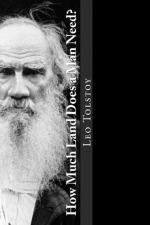 How Much Land Does a Man Need? Setting

Leo Tolstoy
This Study Guide consists of approximately 22 pages of chapter summaries, quotes, character analysis, themes, and more - everything you need to sharpen your knowledge of How Much Land Does a Man Need?.

The story opens in a small, unnamed village in the Russian countryside. There, Pahom lives with his family, on the farm that he owns and operates. He is almost completely content with his life, but he desires to have more land. When he learns that a nearby woman is selling her land, he sells his farm and buys 40 acres of land from her. Although the new farm is even more successful than Pahom’s original farm, Pahom becomes frustrated when neighbors allow their cattle to graze on his land. These frustrations lead to grudges and animosity between Pahom and his neighbors.

After Pahom’s relationships with his neighbors become filled with animosity, he sells his land and moves his family to a village hundreds of miles away. There, he buys an even larger plot of land, and his new farm is even more successful. His...

More summaries and resources for teaching or studying How Much Land Does a Man Need?.

How Much Land Does a Man Need? from BookRags. (c)2022 BookRags, Inc. All rights reserved.