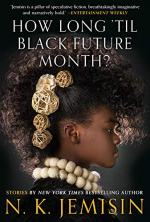 Plot Summary
+Chapters Summary and Analysis
Introduction - L'Alchimista
The Effluent Engine - Valedictorian
The Storyteller's Replacement - Walking Awake
The Elevator Dancer - On the Banks of the River Lex
The Narcomancer
Henosis - Too Many Yesterdays, Not Enough Tomorrows
The You Train - Sinners, Saints, Dragons, and Haints, in the City Beneath the Still Waters
Free Quiz
Characters
Symbols and Symbolism
Settings
Themes and Motifs
Styles
Quotes
Order our How Long 'til Black Future Month? Study Guide

N. K. Jemisin
This Study Guide consists of approximately 99 pages of chapter summaries, quotes, character analysis, themes, and more - everything you need to sharpen your knowledge of How Long 'til Black Future Month?.

This detailed literature summary also contains Quotes and a Free Quiz on How Long 'til Black Future Month? by N. K. Jemisin.

The following version of this book was used to create the guide: Jemisin, N.K. How Long ‘Til Black Future Month? Orbit Books, 2018.

Jemisin’s collection features 22 stories, all of which are speculative in nature and focus heavily on the themes of power, selfhood, and agency. Many of these stories are set in dystopian lands and are structured around the dynamics of power and resistance. In “The Elevator Dancer,” a security guard with an assigned home and an assigned wife finds hope in his bleak world by treasuring the moments on the security footage of a woman who does a secret dance every day in an elevator, while in “Walking Awake,” a caretaker who raises children for parasitic Masters dreams of revolt. “The Trojan Girl” is set in a virtual world where rogue artificial intelligences roam in packs and prey upon unsuspecting humans, until one of them downloads the ability to dream. Meanwhile, “Cloud Dragon Skies” is a cautionary tale set directly in nature. It takes place in a world divided, in which the sky-people live a modern-day existence in a space colony, while the rest of earth lives in harmony according to the old, simple ways. “L’Alchimista” and “Cusine des Memoires” feature characters who learn lessons through the transformative magic of food.

Many of these stories are also about adaptation, risk, and reacting to change. “Too Many Yesterdays, Not Enough Tomorrows” features a lovelorn blogger trapped in her own private reality that she can only escape by taking a great leap into the unknown. “The Brides of Heaven” tells the tale of two different women’s reactions to the death of all the men on their colony, one who moves on and the other who would rather give birth with the help of an alien liquid substance, than give up on motherhood; “The Evaluators” is a disturbing tale about a shapeshifting alien predator so subtle and fluent in the ways of humanity that even the skeptical scientists are seduced. So many of the stories in this collection are defiant reactions to the all-male cast of white heroes who have pervaded science fiction and fantasy for millennia, and deliberately redefine who and what, even, can be a hero. “The Storyteller’s Replacement” features dragon daughters who reclaim their power from the folly of the male ego who drove their species to extinction, while in the story “Sinners, Saints, Dragons, and Haints, in the City Beneath the Still Waters” a black man and a lizard team up together to fight off the sea monster of apathy that is wreaking havoc in the aftermath of Hurricane Katrina.

In the touching post-apocalyptic tale "On the Banks of the River Lex,” Death logs miles crossing the bridges of the Big Apple, bored and unmotivated now that all the humans are dead, but is inspired to live again when he sees an octopus making her species’ new home in of all places, a broken aquarium. “Valedictorian” is about a whip-smart student who refuses to do anything other than her best, even when she is bullied by her peers and learns alien forces will claim the top pupil for their own; “The Effluent Engine” features a female Haitian spy who falls in love with a Creole woman in a steampunk 19th-century New Orleans, and recruits her to build dirigibles and fight for her island’s independence. These stories speak to the evolution of Jemisin’s craft as a master of the speculative tale. At the same time, they are testimony to her remarkable honesty and courage as a writer. Jemisin writes with humanity, compassion, and intelligence. She is not afraid to capture the paradoxical nature of a world that is destroying itself through apathy and avarice at the same time it regenerates through love—to paint our world back to us in all its grave missteps and twilit yearnings.

More summaries and resources for teaching or studying How Long 'til Black Future Month?.