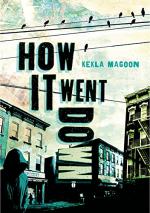 How It Went Down - Day One Summary & Analysis

Kekla Magoon
This Study Guide consists of approximately 62 pages of chapter summaries, quotes, character analysis, themes, and more - everything you need to sharpen your knowledge of How It Went Down.

Jennica shares with the reader that seeing the body on the ground doesn't seem real. There is a jug of milk that has been riddled with bullets and the white milk against the black of the ground, the red of the blood, seems somehow awful and artistic all at once.

A boy named Sammy also sees the shooting take place, and runs over to see if he can help the boy that was shot. He kneels down next to the boy, the eyes are open and unseeing. A small splash of blood gets into his mouth and he feels as if he might throw up, but he doesn’t. The shooter sees him and the Sammy says that the shooter’s look seems to have a voice of its own.

Another boy named Noodle tries to get Jennica to leave the scene of...

(read more from the Day One Summary)

How It Went Down from BookRags. (c)2021 BookRags, Inc. All rights reserved.