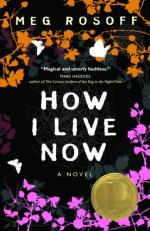 Meg Rosoff
This Study Guide consists of approximately 38 pages of chapter summaries, quotes, character analysis, themes, and more - everything you need to sharpen your knowledge of How I Live Now.

How I Live Now Summary & Study Guide includes comprehensive information and analysis to help you understand the book. This study guide contains the following sections:

This detailed literature summary also contains Topics for Discussion and a Free Quiz on How I Live Now by Meg Rosoff.

A teenager named Daisy arrives from her home in New York City to live with her Aunt Penn and four cousins on a farm in rural England. The time is indefinite, but appears similar to the present and therefore could be based in the near future. Talk of war and occasional terrorist bombings have been occurring for several years in both America and England. Daisy is annoyed with her father for having complied with the wishes of her stepmother, whom she calls "Davina the Diaboloical," to send her to England. Daisy, who believes that Davina hates her and wants to poison her, has developed the habit of eating very sparingly, and is quite thin. Her 14 year-old cousin, Edmond, picks her up at the airport, and she is immediately taken by his rakish but gentle manner. The straightforward and loving nature of her nine year-old cousin Piper also quickly captivates her, as does the beautiful but somewhat crumbling farmhouse on a large property. Her two other cousins, Isaac and Osbert, who are also teenagers, have their own distinctive personalities and her Aunt Penn is a kind and admirable person. Daisy has fallen into a charming situation and wants nothing more than to luxuriate in it, especially after her attraction to Edmond turns into love that he reciprocates. This happens after Aunt Penn leaves the children alone to go to an antiwar conference in Oslo, Norway. The father of the cousins does not figure in the story and is never mentioned. The day after Aunt Penn leaves, a bomb at the London train station kills many people, and before long, occupying forces have taken over England. Even as the underage affair between Daisy and Edmond burgeons and the war escalates, threatening their tranquil life.

Aunt Penn does not return and eventually, British soldiers take over the farmhouse, separating Daisy and Piper, who are sent to live with a family called the McEvoys, a long drive away. Edmond and Isaac are sent elsewhere, and the eldest brother, Osbert, goes off to fight with the soldiers. Daisy, who has shown no interest in the war up to this point, now realizes that she must become involved if she is to return Piper and herself to the boys. She frequently talks in her mind with Edmond, whom she loves deeply, and she can sense him listening. Most members of this family have unusual telepathic abilities, which extend to animals in the cases of Piper and Isaac. Daisy manages to discover from Major McEvoy, the head of the McEvoy household, that the boys are being kept at a place called Gateshead Farm. After Major McEvoy is killed in the war, Daisy and Piper walk to Gateshead Farm, where they find many bodies from the aftermath of a massacre. They return to their family farm, now abandoned by the soldiers, where Daisy's father locates her by phone. Six years pass. Daisy has been brought back to America against her will, but now she is an adult. The war, which encompassed many countries, has finally ended, but Daisy doesn't know what happened to the others. She returns to England, where she finds Piper well and in love with a young man. Isaac and Osbert are also well, but Aunt Penn was killed in the war. Edmond, who witnessed the massacre at Gateshead Farm, is badly damaged psychologically. Daisy decides it is up to her to nurse him back to mental health. This, she says, at the end of the book, is "How I live now."

More summaries and resources for teaching or studying How I Live Now.

How I Live Now from BookRags. (c)2022 BookRags, Inc. All rights reserved.