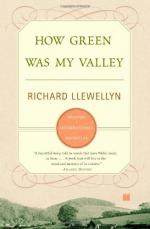 How Green Was My Valley Summary & Study Guide

How Green Was My Valley Summary & Study Guide Description

How Green Was My Valley Summary & Study Guide includes comprehensive information and analysis to help you understand the book. This study guide contains the following sections:

This detailed literature summary also contains Topics for Discussion and a Free Quiz on How Green Was My Valley by Richard Llewellyn.

Richard Llewellyn transports us to a small village in Wales where simple, humble people are dependent upon the coal that runs in seams in the earth that cut through the valleys. Based partially on his own childhood, Llewellyn manages to portray a sublime way of life that, over the years, turns dark and sad as the coal industry changes, and its mining residue destroys the beautiful natural setting of the village.

The story is narrated by Huw Morgan, the youngest son of seven children, with only one younger sister, Olwen. Gwilym Morgan, a stern and powerful Christian, is their wise, loving, gentle father. Huw's mother, Beth, is the stereotype of a strong nurturer whose family unity is her primary goal in life. Huw begins his narration as far back as he can remember, when he was a small child and his older brothers were already working in the town's colliery alongside his father, a respected "checker." The family kept their savings box of gold sovereigns on the mantle, and enjoyed community, wholesome food, the natural beauty of the valleys and hills surrounding them, and their traditions and customs. However, as displaced workers from outside Huw's Valley begin to pour in, looking for work at any wage, and the owners of the coal mines begin to squeeze the workers, the Morgan family's livliehood is threatened. The community that once sang and worshiped together eventually becomes bleak and broken, due to labor strikes, dissension and a rapidly declining standard of living. In addition, the Morgan family itself suffers divisions that change them forever.

Huw 's love for his sister-in-law, Bronwen, and the precious memories of his family weave consistent threads throughout the story. Written in simple English with charming Welsh dialect, the book is a delight to read, and the authenticity of the story, through its rich detail, is palpable. Llewellyn leaves his reader feeling bittersweet about the Morgan family and its small segment of history. We grown to love Huw and his family, as well as his mentor, Mr. Gruffydd, in addition to other well-developed characters.