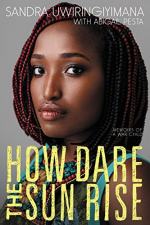 How Dare the Sun Rise Summary & Study Guide includes comprehensive information and analysis to help you understand the book. This study guide contains the following sections:

This detailed literature summary also contains Topics for Discussion on How Dare the Sun Rise by Sandra Uwiringiyimana.

Sandra Uwiringiyimana was born in the Congo, a member of the Banyamulenge tribe of Africa. Her people were stateless and were often targeted because they did not belong. Her parents married young, in keeping with the traditions of the time and place, but they often stepped outside those traditions. Sandra's mother, Rachel, had several years of school before getting married, which was an anomaly for the girls of their tribe. Sandra's father, Prudence, was intrigued by this “educated woman” he met for the first time on the day of their wedding. Rachel had trouble carrying a child at first, but then had seven children: Heritage, Christian, Princesse, Adele, Alex, Sandra, and Deborah. When Sandra was a toddler, the family moved from their home in the mountains to Uvira. Sandra recalled a happy childhood there, though there were problems. Electricity was sporadic, and Prudence often had to be away for work. The oldest son, Heritage, was forced to become a child soldier for the Congolese. He was gone during most of Sandra's early childhood, and she barely knew him when he returned.

There was a constant threat of war. The family often had to leave their home because the Banyamulenge people were often targeted specifically. When they learned of yet another threat, the family packed up and headed to a refugee camp. Sandra, at 10, spent her days trying to find something to do. She missed attending schools but was relieved that she at least had some friends in the camp. Sandra and Deborah were in bed trying to go to sleep one night when Rachel began shouting about an attack. They quickly discovered that the attack was real and several people were shot leaving the tent. Sandra, Rachel, Deborah, Princesse, and several other relatives and friends were still in the tent when some men called for them to come outside. Rachel accepted that they were not going to harm them and went out. The men opened fire, killing Deborah and two of her young cousins and injuring Rachel. The next few months were a nightmare as the family dealt with medical issues and fled to Rwanda. Conditions there were terrible, and it seemed like the perfect answer when they learned of a program sending refugees to America. Prudence began the process and more than a year after the attack, the family was relocated to Rochester, New York.

They were faced with culture shock from their arrival, coping with the brutal cold of a New York winter when they were accustomed to a much warmer climate. They struggled with the language and could not even communicate the kind of food they wanted. They were in awe of Walmart, which was more like a town than a grocery store. They met some kind people along the way, but they were barely coping with their daily lives.

One day, Prudence was badly injured while riding a bicycle to run an errand. He spent months in the hospital and in physical therapy, and the healing was slow. Rachel worked two jobs part of the time, and Sandra found herself in the role of dealing with credit card companies and cable companies while trying to help her parents learn about this new culture. She soon discovered the racial divisions were strong and she hated school until she received a scholarship to a private Catholic school. College was another shock and Sandra found herself struggling with the racial division there as well. When she began having nightmares and flashbacks, she dropped out of college and moved in with a friend in New York City.

Sandra's choices caused a rift in her family and she refused to talk to her parents for awhile. She had been an activist since she was in high school, and she renewed her interest and activities toward bringing focus to the plight of the Banyamulenge tribe and the hundreds of people living in refugee camps.

How Dare the Sun Rise from BookRags. (c)2022 BookRags, Inc. All rights reserved.