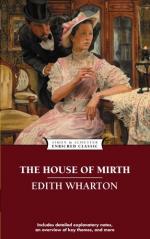 Introduction & Overview of The House of Mirth

The House of Mirth Summary & Study Guide includes comprehensive information and analysis to help you understand the book. This study guide contains the following sections:

This detailed literature summary also contains Bibliography and a Free Quiz on The House of Mirth by Edith Wharton.

While The House of Mirth was only Edith Wharton's second novel, Cynthia Griffin Wolff points out in the Dictionary of Literary Biography, with it Wharton "emerged as a professionally serious, masterful novelist." Published in 1905 it had the fastest sales of any of its publishing house's books at the time. The novel, as well as many of Wharton's other works, continues to enjoy great success to the present day.

In The House of Mirth, Wharton explores the status of women at the turn of the nineteenth to the twentieth century; indeed, Wolff believes that the novel "echo[es] the many dissatisfactions Wharton felt at this time." Heroine Lily Bart is a beautiful woman who has been brought up to achieve one goal: marry a wealthy, well-placed man. Although Lily, twenty-nine when the novel opens, has had opportunities to do so, her spirit has always recoiled from taking the step of marrying for money. However, the fate dealt to Lily in life is not spinsterhood but a fall from grace, that is New York's social circle, which comprises the only world Lily has ever known.

Over the past century, scholars and readers alike have applied numerous interpretations to this complex novel. Upon its initial publication, many readers saw it as a critique of the so-called marriage market. Contemporary scholars, however, have tended to read the novel, and Lily's actions, with a feminist slant. As Linda Wagner-Martin writes in her study The House of Mirth, "[It] is a key example of a woman's voice exploring significant women's themes in a covert manner: fiction as disguise."