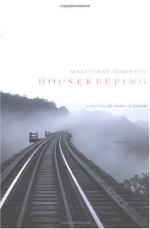 Marilynne Robinson
This Study Guide consists of approximately 34 pages of chapter summaries, quotes, character analysis, themes, and more - everything you need to sharpen your knowledge of Housekeeping.

This detailed literature summary also contains Topics for Discussion and a Free Quiz on Housekeeping by Marilynne Robinson.

Housekeeping is the story of two sisters coming of age in an isolated mountain town. The narrator, Ruth, and her younger sister, Lucille, rely on each other to survive. Their father deserts the family too early for them to remember him. When Ruth is about six, their mother commits suicide. Their grandmother takes them in for five years until her death. Then two, unmarried, elderly great-aunts take custody. These anxious ladies cannot cope with children, so they turn the girls over to their mentally unbalanced aunt, Sylvie. The household gradually dissolves into total disorder. Ruth bonds with the free-spirited Sylvie, but the more conventional Lucille yearns for stability. The school ignores the girls' truancy and increasingly uncared-for appearance until Lucille begs for help from her home economics teacher, who gives her refuge. The chaos of the household situation is exposed. A judge tries to take custody of Ruth, but she refuses to be parted from her aunt. Sylvie leads Ruth in a dangerous midnight walk out of town across a high railway bridge. They elude the authorities and go on to live a transient life, drifting from place to place. Ruth is haunted by thoughts of her sister and always contemplates getting in touch with Lucille, but never does so. This is the first novel by the Pulitzer Prize winning author.

Narrator Ruth Stone's grandfather loves the mountains and settles in the remote town of Fingerbone, Idaho. He works on the railway, prospers, marries, and builds a house with his own hands and no knowledge of carpentry. He dies in a spectacular midnight train derailment off the high railway bridge into the fathomless lake just outside of town. This disaster is the one notable thing that has ever happened in Fingerbone. His widow continues to live in the house and raise their three daughters: Molly, Helen, and Sylvie. Molly goes off to China as a missionary. Helen marries Reginald Stone and moves to Seattle. Sylvie marries a man named Fisher and leaves Fingerbone, though she seems to have no fixed address after leaving.

Helen and Reginald Stone have two daughters, Ruth and Lucille, but their father deserts the family so early in their lives that the girls have no memory of him. They grow up in Seattle in an apartment with their mother. A gossipy neighbor, Bernice, babysits while Helen goes out to work. Bernice offers the loan of her car so Helen can take Ruth and Lucille to Fingerbone to meet their grandmother. Helen drives the girls to her mother's house, arriving Sunday morning. She leaves them on the screened porch, telling them she will be right back. After leaving, she drives the car over a cliff into the lake to her death. Ruth and Lucille are raised by their kindly grandmother for the next five years. The grandmother provides a comfortable home, but due to old age and the loss of so many loved ones, she often seems too distracted to really see them. She never asks them about their lives or discusses their mother.

After the grandmother's death, her sisters-in-law, Lily and Nona, agree to move to Fingerbone to take care of the girls. But the dithering, elderly maiden ladies are nervous around children. They hate the remote town of Fingerbone and long to go back to their cozy residential hotel in Spokane. They don't know how to reach Helen's sister, Sylvie, but she happens to write with her most recent address. Sylvie is persuaded to travel to Fingerbone to consider looking after the girls. She arrives on a bitterly cold winter day, wearing a huge, shapeless overcoat and loafers with no socks. She also has no gloves, scarf, or hat. Even the girls can see she is barely able to take care of herself, let alone anyone else, but she talks calmly to the girls and answers their questions about what their mother was like. Sylvie tells the girls frankly that the aunts are too old to take care of them and she will stay, for the moment. The aunts are gone by that evening.

Within a week of Sylvie's arrival, the town of Fingerbone suffers the worst flood in living memory, prompting many to evacuate or travel around town by boat. Sylvie, Ruth, and Lucille, whose house is on high ground, have only four inches of water flooding the ground floor, but they must spend the next few days in the second floor bedrooms. With no electricity and mainly card playing to distract them, Lucille complains of boredom and Sylvie tells them a story about a woman whose children were taken away by the court. The girls realize that they might lose their home with Sylvie, and are even more frightened when she goes to the flooded downstairs and doesn't come back up again, or even reply when called. Terrified that they have been deserted, Ruth goes to fetch her. She finds Sylvie, who doesn't recognize her and won't speak to her. Ruth hits her and pulls her back up to the second story, where Sylvie picks up the playing cards to resume the game as if nothing had happened.

As the floodwaters recede, the town begins to set things to order, but Sylvie, Ruth, and Lucille's home has begun a downward spiral that will only intensify. Lucille fakes an illness to avoid an embarrassing situation with a teacher who falsely accuses her of cheating. The excuse note Sylvie writes to the school says that she didn't take Lucille to the doctor because she didn't seem really sick. The girls know that note won't be acceptable, and they both play truant from school. For a week they go down by the lake, until the day when they see Sylvie talking to some hobos camping there, and walking out onto the high railway bridge over the lake. Up on the bridge she finally notices them and waves. When they tell her they didn't go to school she accepts the fact with no particular interest. Ruth and Lucille go back to school with no note or excuse, but no one asks them any questions. They begin to get the idea that others have noticed Sylvie's odd behavior.

Lucille and Ruth have different views of Sylvie's eccentric housekeeping. Sylvie insists on eating dinner in the dark and accumulates collections of autumn leaves, newspapers, and tin cans on every flat surface. She also furnishes the girls with sequined blue velveteen ballet slippers as school shoes to trudge through the inches of spring mud. Ruth accepts Sylvie's bizarre behavior, but Lucille begins to rebel. Both girls stop going to school once the weather turns warm, but when they return to school in the fall, Lucille tells Ruth they need to make new friends and she begins to spend all her spare time with a group of girls at school. Ruth is isolated and alone. Sylvie takes Lucille's absence as a rebuff and is more and more silent.

Finally, Lucille walks out and goes to take refuge with her Home Economics teacher, Miss Royce, who is so moved by her plight that she essentially adopts her. From that moment Ruth no longer has a sister. Sylvie responds by taking Ruth on an expedition by stolen rowboat to see an abandoned house that has fallen into its cellar on the other side of the lake. She abandons Ruth there for most of the day and they end up spending the night in the boat and riding a freight car into town the next morning. As Ruth is sitting in the kitchen by the warm stove, totally exhausted, Lucille comes in to tell her that she doesn't need to stay with Sylvie, but Ruth is too sleepy to be able to talk to or even hear her sister.

The sheriff starts visiting soon after Sylvie is observed bringing Ruth into town on the freight train. It is assumed that Sylvie is turning Ruth into a transient as well. Neighbor women and church women come to the house bringing casseroles and questions, and cast shocked looks Sylvie's collections of bottles and cans and stacks of newspapers, magazines, and paper bags. Sylvie realizes that she is about to lose Ruth, and she makes a heroic effort to create a more normal household, burning all the stacks of paper late into the night, forgetting supper. Ruth mischievously hides from Sylvie in the dark, and Sylvie is calling for her when the sheriff arrives, drawn by the fire and the noise. He tries to get Ruth to come home to stay with himself and his wife. When she refuses, he promises to return the next day. As soon as he is gone, Sylvie and Ruth set the house on fire and escape by walking across the railroad bridge, the one route no one will dare to follow.

At dawn, Sylvie and Ruth reach the other end of the bridge and climb down just as the first train of the day roars past. They hop on a boxcar, and begin a life of drifting. Ruth occasionally takes a waitress or clerical job, but leaves before anyone can get close to her. People soon realize she is an outsider. Ruth speculates that she was always different from other people, and that every event of her life increased that distance until the harrowing midnight walk across the railways bridge sealed her destiny. She and Sylvie talk about contacting Lucille, but she knows they never will.

More summaries and resources for teaching or studying Housekeeping.