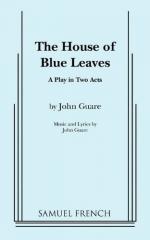 The House of Blue Leaves Themes

Nearly every character in The House of Blue Leaves is betrayed by anotheror by his or her own desires. Artie suffers from the most severe betrayals. His girlfriend, Bunny Flingus, spends most of the play encouraging, if not pushing, his career. She convinces Artie that Billy Einhorn is the key to his success. At the end of the play, Billy offers Bunny his extra ticket to Australia, and Bunny goes with him. She betrays Artie to ensure that she has a secure future.

Artie is also betrayed by his own dreams for success. These dreams are not based on reality, but on Bunny's ideas, which have been propagated by the mass media.

Artie betrays his wife, Bananas. She suffers from some sort of mental illness, and Artie is her primary caretaker. He has betrayed her by becoming involved with Bunny. Indeed, Bunny and Artie intend to marry...