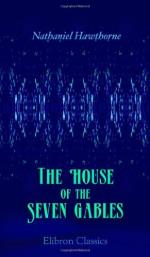 Nathaniel Hawthorne
This Study Guide consists of approximately 48 pages of chapter summaries, quotes, character analysis, themes, and more - everything you need to sharpen your knowledge of The House of the Seven Gables.

One of Hawthorne's best-known and respected novels is The Scarlet Letter (1850).

Following the publication of The House of the Seven Gables, Hawthorne completed two additional novels: The Blithedale Romance (1852) and The Marble Faun (1860).

Herman Melville and Hawthorne shared a brief friendship from 1850 until 1856. The two reviewed each other's work publicly and even after Hawthorne's death, Melville continued to read and annotate Hawthorne's work. Melville's character Vine in his long poem Clarel: A Poem and Pilgrimage in the Holy Land (published by Northwestern University Press in 1991) is believed to be based on Hawthorne.

Another poem by Herman Melville that is believed to be about Hawthorne is "Monody," which first appeared in Timoleon (published by Folcroft Library Editions in 1976) and can also be found in American Poetry : The Nineteenth Century : Herman Melville to Trumbull Stickney...

More summaries and resources for teaching or studying The House of the Seven Gables.

The House of the Seven Gables from Gale. ©2005-2006 Thomson Gale, a part of the Thomson Corporation. All rights reserved.