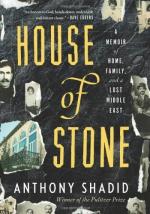 House of Stone: A Memoir of Home, Family, and a Lost Middle East Setting & Symbolism

Anthony Shadid
This Study Guide consists of approximately 53 pages of chapter summaries, quotes, character analysis, themes, and more - everything you need to sharpen your knowledge of House of Stone.

The Young Olive Tree is something Shadid plants during his very first visit to Isber Samara's house, before he has even decided to rebuild it. It is a symbol of his determination to see the house reborn, and of continuity between the generations of his family.

Isber Samara's House is the main object of focus in the memoir, the reason Shadid returns to Marjayoun to resurrect it from its long abandoned shell of a self. Reconstruction of the house takes up the bulk of the narrative. It becomes known as the "warshe," or "workshop."

Mount Hermon is a major landmark outside of Marjayoun, a snow-covered peak that provides the town with beautiful vistas and forms part of the border with nearby Israel.

More summaries and resources for teaching or studying House of Stone: A Memoir of Home, Family, and a Lost Middle East.

House of Stone: A Memoir of Home, Family, and a Lost Middle East from BookRags. (c)2022 BookRags, Inc. All rights reserved.