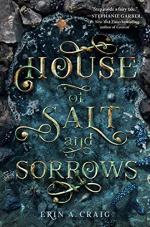 Erin A. Craig
This Study Guide consists of approximately 50 pages of chapter summaries, quotes, character analysis, themes, and more - everything you need to sharpen your knowledge of House of Salt and Sorrows.

House of Salt and Sorrows Summary & Study Guide includes comprehensive information and analysis to help you understand the book. This study guide contains the following sections:

This detailed literature summary also contains Quotes and a Free Quiz on House of Salt and Sorrows by Erin A. Craig.

The following version of this book was used to create the guide: Craig, Erin A. House of Salt and Sorrows. Delacorte Press, 2019.

House of Salt and Sorrows by Erin A. Craig contains 40 chapters and a brief epilogue but is not divided further into any sections. The chapters move the plot in chronological order, beginning with Eulalie’s funeral.

In Chapters 1 – 8, the Thaumas girls are introduced, as are Morella and Ortun, their stepmother and father, respectively. Annaleigh, the narrator, reveals that her sisters have been dying, one by one, and that of the original 12 daughters only eight remain. Morella announces that she is pregnant with a son, taking the family out of their period of mourning and thus allowing the triplets – Rosalie, Ligeia, and Lenore – to celebrate their impending birthday with a ball. The sisters all receive new shoes and dresses for the ball, and though Annaleigh argues with her father over how soon the family has moved past her sister Eulalie’s death, she ultimately wants to make him happy and goes along with his plans for the party. Later, Annaleigh and her sister Camille run into Edgar, Eulalie’s former lover, and are suspicious of his eagerness to avoid them.

Annaleigh also meets a handsome stranger named Cassius who is the son of a renowned captain on the Salann Islands. Annaleigh becomes certain, after hunting for clues on the islands, that her sister Eulalie was murdered. Thus, when she finds out her sister Verity is seeing apparitions of the dead Thaumas girls, she wonders if they are haunting the family because their deaths were not an accident.

In Chapters 9 – 16, Annaleigh tries to convince her siblings and Hanna, the family’s servant, that Verity is seeing ghosts. She gives up and tries to get ready for her sisters’ ball but experiences visions of an octopus trying to kill her. At the ball, she pushes aside the vision but realizes none of the guests want to dance with her siblings or her because they believe the family is cursed. Fisher, Hanna’s son, arrives at the ball and Annaleigh is overjoyed because she used to be in love with him and now thinks of him as an old friend. At breakfast the next day, the sisters confront their father about the family curse, and he dismisses the rumors angrily.

Fisher helps the girls find a magic door, hidden on the island by the ocean god Pontus, which helps them travel to a far-off province and dance at other balls, where no one knows they are supposedly cursed. In Pelage, at the first secret ball they attend, Annaleigh dances with a stranger in a suit with a three-headed dragon on it. He makes her uncomfortable though she cannot understand why. When Fisher professes his love to her, Annaleigh becomes sad, because she cannot stop thinking about Cassius, who is also at the ball, and must reject Fisher’s advances.

In Chapters 17 – 24, the Thaumas girls dance at secret balls for a week straight, wearing out their shoes. Their father sends them to Astrea to buy new shoes, but there Annaleigh speaks with Edgar and finds out he thinks her family’s servant, Roland, killed Eulalie. Soon after their conversation, Edgar is found dead. Annaleigh begs Fisher to check the building Edgar supposedly jumped from, but he says he sees no signs of foul play. The next day, Morella experiences terrible pregnancy pains, as she is having twins. Ortun is away on a business trip, so the girls rally to help her, with Annaleigh taking over from Morella the responsibility of planning the Churning festival. The festival is important to the People of the Salt, and Morella is extremely grateful. At Churning, the Thaumases host a dinner on the first night but Ortun gets too drunk and proposes that any man who discovers why his daughters have worn out their shoes so quickly can have any of them as a bride. Cassius angers Annaleigh when he makes a joke about wanting to marry Camille.

In Chapters 25 – 32, the Thaumases awake to find that Ligeia and Rosalie are missing. After a thorough search, Annaleigh and Cassius find them dead in a forest near their house. The family goes into mourning yet again, but Fisher tries to convince Annaleigh that Cassius murdered them and Eulalie. Annaleigh has terrible visions at night once more, believing that the ghosts of Rosalie and Ligeia are trying to kill Lenore so that the triplets can all be together again, but she wakes to find Cassius before her. She accuses him of being a killer, so he asks her to trust him just once so that he can prove he is not who she thinks he is. He shows her that he is the son of Versia, the Night Queen, and that he has been communicating with her late sisters ever since they passed away. They told him all about her and he fell in love with her before he had the chance to meet her. Annaleigh is shocked but overjoyed, and the pair share a kiss.

They concoct a plan to take all the girls dancing through the magic door once more in order to get to the bottom of the mysteries at hand, since Cassius reveals that he was never in Pelage and that someone is tricking the girls with illusions. That very night, after dancing at the ball which turned from a dream into a nightmare, full of terrifying illusions and the man in the three-headed dragon suit, Annaleigh wakes up to find Cassius staring at her. He says there are no balls, the girls are simply dancing in their own rooms, imagining the same illusions.

In Chapters 33 – Epilogue, Cassius and Annaleigh must re-light a lighthouse on Hesperus in order to help Annaleigh’s father sort out a shipwreck nearby. They put their investigation into the illusions on hold and use Cassius’s magic abilities to get to the island. They find the Keeper of the Light dead, and Fisher’s decomposing body. Annaleigh is in shock as she had just seen Fisher, not too long ago. Suddenly, the Harbinger of Madness, Kosamaras, appears before the pair. She is the one creating the terrible illusions which led to Rosalie and Ligeia’s deaths. A Trickster named Viscardi entered into a bargain with someone desperate, and her illusions are the price the Thaumas family must pay so that Viscardi can grant this person’s wish. Kosamaras then disappears, and Annaleigh and Cassius try to think of who could have entered into this bargain. They go back to Annaleigh’s home, where her family accuse her of killing Verity. They say that no one by the name of Cassius has ever been in their home, and they fear Annaleigh is losing her mind. Even Fisher, they say, was buried long ago, thus Annaleigh cannot trust anything she sees or hears.

When Morella goes into labor, the family stops worrying about Annaleigh and rallies to help her give birth. Her first son is stillborn, so when Ortun leaves the room, Annaleigh and Camille begin to help Morella relax so that she may deliver her next child. She reveals, accidentally, that it was she who entered into a bargain with Viscardi, but that she repents because she became Annaleigh’s true friend. She is the one who killed Eulalie, too, after the girl discovered Morella’s dark secrets. She gives birth to a monster baby, half-her, half-Viscardi. When Viscardi arrives, Morella begs him to kill her and spare the remaining Thaumas girls. He does so.

As Annaleigh and Camille leave the house in relief, they realize their home is on fire. They escape, along with all of their sisters, and even missing Verity is found. Cassius saved her, proving he does exist and Kosamaras had made everyone forget him. Ortun dies in the fire, but the remaining Thaumas sisters and Hanna survive. Cassius dies of his injuries but, several months later, he returns to the Salann Islands, healed by his magical mother, to be with Annaleigh forever.

More summaries and resources for teaching or studying House of Salt and Sorrows.

House of Salt and Sorrows from BookRags. (c)2022 BookRags, Inc. All rights reserved.