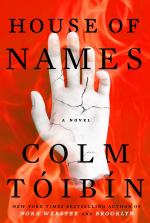 House of Names: A Novel Setting

Colm Tóibín
This Study Guide consists of approximately 75 pages of chapter summaries, quotes, character analysis, themes, and more - everything you need to sharpen your knowledge of House of Names.

Though described little within the diegesis of House of Names, Mycenae is the novel’s primary setting, it being the land over which Agamemnon and Clytemnestra rule. It is significant if only because according to the mythos, here is where the Atreus first became king. Mycenae was a military stronghold, and thus had a certain political power.

Despite never being named within Tóibín’s novel, Aulis is the place at which Iphigenia is sacrificed. It is significant because Aulis acts as a middle point between the Achaians and the Trojans during the days prior to the Great War. It is a space of stagnation, where no men are permitted forward passage due to the Gods’ intervention. It is further a space of sacrifice: where Agamemnon kills his eldest daughter in order to further...

More summaries and resources for teaching or studying House of Names: A Novel.

House of Names: A Novel from BookRags. (c)2021 BookRags, Inc. All rights reserved.