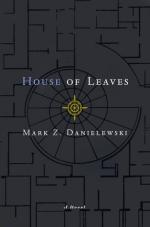 Objective data is compiled in this chapter concerning the aspects of the house. No changes in geometry, no dust, radios with limited range, etc. Comments on notes such as, "What we have here is a nice banquet of igneous, sedimentary and metamorphic samples, some granular, possibly gabbro and pyroxenite, some with much less grain, possible trachite or andesite." There are also charts containing levels of carbon, potassium, rubidium, lutetium, thorium and uranium.

Johnny is slipping from reality. He leaves his apartment only to buy more tuna fish or get books from the library. He's received several eviction notices and his neighbors are afraid of him. He's also lost 18 pounds so far and his nights were filled with nightmares that made him scream out loud.

He remembers his mother used to write him letters all the time. She apologizes in one and Johnny thinks...