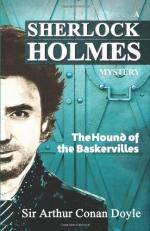 The Hound of the Baskervilles - Chapter 14 Summary & Analysis

Arthur Conan Doyle
This Study Guide consists of approximately 56 pages of chapter summaries, quotes, character analysis, themes, and more - everything you need to sharpen your knowledge of The Hound of the Baskervilles.

Sherlock Holmes and Dr. Watson return to Baskerville Hall. Holmes remarks what a cunning, cruel man Stapleton is in the way that he was able to keep his composure after learning his murderous plan failed. Watson wants to have Stapleton arrested, but Holmes says there is not enough evidence. They only heard the sound of a hound; they did not actually see a hound kill Selden. There is no direct connection between a hound and the deaths of Selden and Sir Charles. Selden died in a fall. Sir Charles died of fright. There is an absence of motive.

Back at Baskerville Hall, Mrs. Barrymore is in deep mourning for her brother, Selden. Sherlock Holmes tells Sir Henry that Selden was wearing his clothes when he died. The implication is clear.

After dinner, Sherlock Holmes peers over a collection of family oil paintings of...

More summaries and resources for teaching or studying The Hound of the Baskervilles.

The Hound of the Baskervilles from BookRags. (c)2021 BookRags, Inc. All rights reserved.