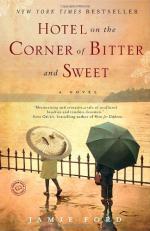 Hotel on the Corner of Bitter and Sweet Summary & Study Guide

Jamie Ford
This Study Guide consists of approximately 82 pages of chapter summaries, quotes, character analysis, themes, and more - everything you need to sharpen your knowledge of Hotel on the Corner of Bitter and Sweet.

Hotel on the Corner of Bitter and Sweet Summary & Study Guide includes comprehensive information and analysis to help you understand the book. This study guide contains the following sections:

This detailed literature summary also contains Quotes and a Free Quiz on Hotel on the Corner of Bitter and Sweet by Jamie Ford.

The following version of the novel was used to create this study guide: Ford, Jamie. Hotel on the Corner of Bitter and Sweet. Ballantine Books, January 27, 2009. Kindle.

Hotel on the Corner of Bitter and Sweet by Jamie Ford tells the story of lost love and the power of prejudice. The novel follows Henry Lee, an American citizen of Chinese ancestry. While growing up in Seattle, Washington, Henry struggles to understand the bad treatment during WWII of American citizens who are Japanese. Henry's father demands that Henry not go near the areas of Seattle known as Chinatown or Japantown. His father's demands only worsen Henry's struggles. However, his father’s orders do not keep Henry from befriending Keiko, a Japanese girl who attends the same school as Henry. Years later, after Henry and Keiko are separated by time and circumstances, Henry begins to think about her again. Eventually, they are reunited.

The United States government sent the Japanese to concentration camps during WWII. Before the Japanese left Seattle, they stored their belongings in the Panama Hotel. When the new owner of the hotel announced that she had found these belongings still in that basement, Henry was surprised to recognize a parasol among the things that had been brought upstairs. Henry believed it had belonged to Keiko, the Japanese girl with whom Henry had fallen in love during the war years. His father had interfered with the mail system so that Keiko and Henry did not receive the letters they mailed to one another.

Recently widowed, Henry thinks about his relationship with Keiko and wonders if there could be anything left for them. Among the things Henry finds in the basement while looking for memories of his lost friend is a broken copy of the Oscar Holden record "The Alley Cat Strut." Oscar Holden was a famous jazz musician who had once dedicated a version of that song to Henry and Keiko when they went to hear Henry’s friend, Sheldon, play in a jazz club with Oscar Holden.

Henry takes the record to Sheldon, who is near death in a nursing home. Sheldon, who understood how special that song was to both Henry and Keiko, tells Henry to “fix it” (271). At first, Henry believes that Sheldon is talking about the record, but he later learns that Sheldon wants Henry to try to fix the broken relationship between himself and Keiko.

Henry's son Marty and Marty's future wife help Henry find Keiko. She is now a widow in New York City. Keiko welcomes a visit from Henry. As the story closes, Keiko tells Henry that they should think of the good times in their relationship, not the times that were taken from them.

More summaries and resources for teaching or studying Hotel on the Corner of Bitter and Sweet.

Hotel on the Corner of Bitter and Sweet from BookRags. (c)2022 BookRags, Inc. All rights reserved.