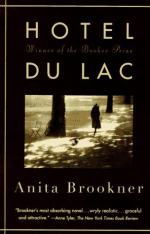 Anita Brookner
This Study Guide consists of approximately 43 pages of chapter summaries, quotes, character analysis, themes, and more - everything you need to sharpen your knowledge of Hotel du Lac.

This detailed literature summary also contains Topics for Discussion and a Free Quiz on Hotel du Lac by Anita Brookner.

Edith Hope, a fiction writer, arrives at the Hotel du Lac at the urging of friends after a failed marriage attempt. The first people she meets are Iris and Jennifer Pusey, a wealthy mother and daughter who are staying at the hotel solely to shop for luxuries in the nearby towns. Edith is slightly in awe of the Puseys, especially the mother, Iris, who possesses an air of confidence about her at all times. Edith is also jealous of the close, loving relationship the two share because this is something that Edith herself never experienced. Jennifer is close in age to Edith but she does not attempt to befriend Edith; she is entirely devoted to her mother and the two are inseparable.

Edith also becomes acquainted with Monica, a tall, thin, attractive woman who is at the hotel to recuperate from an eating disorder (although she seems to be making little effort to do so).

Throughout her stay, Edith writes letters to David, a married man with whom she is having an affair. She seems to care for him very deeply and refers to him lovingly in her letters. During their relationship, Edith had accepted a marriage proposal from Geoffrey Long, a nice man to whom she was introduced by her close friend and neighbor, Penelope Milne.

On her wedding day, Edith dresses and enters the waiting car; but instead of going directly to the Registry Office, she instructs the driver to circle around the park first to give her a chance to clear her head. When the time for the ceremony arrives, Edith tells the driver to keep going, horrifying the members of the wedding party as the car passes by without stopping. Her friends are shocked at Edith's behavior and Geoffrey refuses to speak to her. Because of this event, Edith's friends urge her to get away and so she has arrived at the Hotel du Lac, where the bulk of the story takes place.

During her stay, Edith meets a man by the name of Mr. Neville. He takes a liking to her and they go on a few outings together. Just before Mr. Neville plans to leave the hotel, the two enjoy a boat ride and Mr. Neville asks Edith to marry him. Although he admits that he does not love Edith and Edith does not love him, Mr. Neville insists that his life and hers would fit perfectly together; she could stay at home and work on her novels while he is away. Since they are both unattached, it simply makes sense for them to wed. Edith is surprised by his proposal and takes some time to consider it.

By that evening, Edith decides to accept. That night she goes up to her room to write a letter to David to inform him that she will be marrying a man she met at the hotel and will no longer be seeing him. The following morning, Edith wakes early to mail the letter; as she exits her room, she sees Mr. Neville quietly slipping out of Jennifer Pusey's room. Edith realizes that they have been having an affair and is not surprised. Instead of mailing the letter, Edith goes back to her room, tears it up and throws it away. She then goes downstairs and sends a one-word telegram back home to England: "Returning."