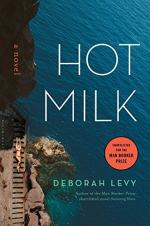 Related Topics
The Cost of Living: A Working Autobiography
The Man Who Saw Everything

Deborah Levy
This Study Guide consists of approximately 36 pages of chapter summaries, quotes, character analysis, themes, and more - everything you need to sharpen your knowledge of Hot Milk.

This study guide refers to the following version of this book: Hot Milk, by Deborah Levy. Bloomsbury USA. 2016.

Sofia Papastergiadis and her mother Rose have traveled from England to Spain to seek a diagnosis and treatment for Rose at the Gómez Clinic. Sofia is feeling lost because she does not have a job or family of her own. She has abandoned her doctoral studies to help care for her mother.

Frustrated with her place in life, Sofia considers herself broken. She meets Juan, a student in the observation hut, after she is stung by jellyfish, which the locals refer to as medusas. At the clinic, Sofia listens to her mother talk to Dr. Gómez about her health. Dr. Gómez begins to offer advice to Sofia by telling her that she must be more bold.

After Sofia meets a German woman named Ingrid, Sofia decides to put her boldness to the test. Following Dr. Gómez’ instructions, she steals a fish from a local market and sets a barking dog free. Sofia and Ingrid continue to flirt with one another, but after Ingrid leaves before eating dinner with Sofia, Sofia invites Juan to join her. Sofia and Juan begin a sexual relationship. Soon after, Sofia and Ingrid begin one as well.

Sofia continues to explore aspects of her sexuality and try to understand her life and what she wants. While Rose continues with her treatment, Sofia decides to go and visit her father, whom she has not seen since she was fourteen, in Greece. While in Greece, her father Christos introduces her to his new wife, who is only a few years older than Sofia, and their baby daughter Evangeline.

During her trip, Sofia spends more time with her father’s new wife Alexandra than she does her father. Sofia understands that they will never be close, but she decides to stay in communication with Alexandra.

Back in Spain, Sofia continues her relationships with Ingrid and Juan. Dr. Gómez has taken Rose off of all of her medications, trying to ascertain whether Rose’s illness is physical or mental. Rose apologizes to Sofia for Christos’ aloofness during Sofia’s visit to Greece, but she does not realize how much she controls Sofia.

Sofia decides to apply to an American university to continue her doctoral studies. As she becomes closer to Ingrid, Ingrid reveals a dark secret about something she did to her sister when they were young. Sofia realizes that Ingrid does not know her limits, when Ingrid holds Sofia under water, not letting her up for air until Ingrid is stung by jellyfish and is distracted by the pain.

Despite knowing that Ingrid may not be the best choice, she admits that she is in love with Ingrid and chooses to continue a relationship with her. Sofia confronts her mother and after thinking that she may have killed her mother, she goes to Dr. Gómez for advice.

Sofia returns to the house to find her mother alive and well. Rose explains to Sofia that she finally got a proper diagnosis from Dr. Gómez. Sofia struggles to believe the diagnosis.

More summaries and resources for teaching or studying Hot Milk.