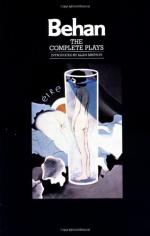 This raucous comedy-drama tells the parallel stories of two soldiers, one Irish and one British, both captured and held hostage as part of the ongoing hostilities between the Irish Republican Army and the British government. Sudden violence and equally sudden outbursts of music and edgy humor combine with the story to explore themes relating to the nature of imprisonment, preconception, and honor.

The actors dance an Irish jig, in which Mulleady dances with Miss Gilchrist while two drag queens, Princess Grace and Rio Rita, dance together. Two prostitutes speak angrily to them, they reply angrily, and a blast of bagpipes serves as a transition into the first scene.

Argumentative conversation between Pat and Meg reveals that the bagpipes are being played by Monsewer, practicing to play a lament for a young member of the IRA (Irish Republican Army) who is to...