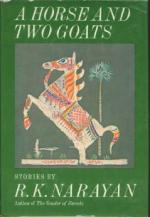 Introduction & Overview of A Horse and Two Goats

R. K. Narayan
This Study Guide consists of approximately 39 pages of chapter summaries, quotes, character analysis, themes, and more - everything you need to sharpen your knowledge of A Horse and Two Goats.

A Horse and Two Goats Summary & Study Guide includes comprehensive information and analysis to help you understand the book. This study guide contains the following sections:

First published in the Madras, India, newspaper The Hindu in 1960, "A Horse and Two Goats" did not achieve a wide international audience until 1970 when it became the title story of R. K. Narayan's seventh collection of short stories, A Horse and Two Goats and Other Stories. It reached an even wider audience in 1985 when it was included in Under the Banyan Tree, Narayan's tenth and best-selling collection. By this time Narayan was well established as one of the most prominent Indian authors writing in English in the twentieth century. The story presents a comic dialogue between Muni, a poor Tamil-speaking villager, and a wealthy English-speaking businessman from New York. They are engaged in a conversation in which neither can understand the other's language. With gentle humor, Narayan explores the conflicts between rich and poor, and between Indian and Western culture.

Narayan is best known for his fourteen novels, many of which take place in the fictional town of Malgudi. Many of the stories in his thirteen short story collections also take place in Malgudi, but "A Horse and Two Goats" does not. This accounts for the fact that the story has attracted very little critical commentary; however, all of the attention it has drawn has been positive. The story is seen as a fine example of Narayan's dexterity in creating engaging characters and humorous dialogue, but it is not considered one of his greatest works.

More summaries and resources for teaching or studying A Horse and Two Goats.

A Horse and Two Goats from Gale. ©2005-2006 Thomson Gale, a part of the Thomson Corporation. All rights reserved.