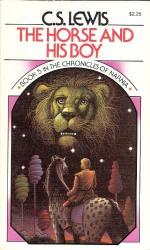 Additional Resources for The Horse and His Boy by C. S. Lewis

Coren, Michael. The Man Who Created Narnia: The Story of C. S. Lewis. Grand Rapids, MI: William B. Eerdmans, 1994. This is a well-illustrated and well-rounded account of Lewis's life, intended for young readers.

New York: HarperCollins, 1994. This reference for "The Chronicles of Narnia" is more for adults than for youngsters. It is an alphabetical listing of characters and themes, with some sharp, insightful explanations of major issues.

Edited by Lyle W. Dorsett and Marjorie Lamp Mead. New York: Simon & Schuster, Touchstone, 1985. Lewis had an extensive correspondence with children, who wrote to him from all over the world. He made a point...