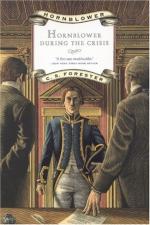 C. S. Forester
This Study Guide consists of approximately 40 pages of chapter summaries, quotes, character analysis, themes, and more - everything you need to sharpen your knowledge of Hornblower During the Crisis.

Hornblower During the Crisis Summary & Study Guide includes comprehensive information and analysis to help you understand the book. This study guide contains the following sections:

This detailed literature summary also contains Topics for Discussion and a Free Quiz on Hornblower During the Crisis by C. S. Forester.

Commander Horatio Hornblower transfers command of Hotspur to a replacement officer and then takes passage to England aboard a supply ship. He is shortly joined by the officers of Hotspur, which has run aground and foundered. As the supply ship sails for England a French privateer attempts a capture. Hornblower formulates an audacious surprise counter-attack on the French vessel and disables it, allowing the supply ship to escape. In addition, Hornblower captures a large store of secret French documents. In England, Hornblower becomes involved in a plot to utilize the captured documents to introduce forged orders to the French fleet. Hornblower travels to France and, acting as a spy, places the forged documents into the French naval communication stream where they cause the French fleet to sortie, leading to the triumphant English victory at Trafalgar.

Hornblower has just completed a two-year tour of duty commanding Hotspur in the shoaling and tricky waters of the approach to Brest, as part of the blockading English fleet. In the opening of the novel, he transfers command to Meadows and then takes passage aboard Princess, a water-hoy bound for England. The very next day, however, Meadows runs Hotspur aground and the sloop founders, breaks up and is lost. While Princess awaits a fair wind, a court-martial ensues and Meadows is reprimanded. Meadows and the other former officers of Hotspur are subsequently transferred to Princess for transport back to England. After several days aboard the exasperatingly over-crowded Princess, the wind makes fair for England and the supply ship departs.

In England, Hornblower turns the documents over to the admiralty. They prove of great worth and a plot of intrigue is conceived. Acting as a servant to a Spanish Count, Hornblower captures forged documents—enabled by copying the just-captured French codes—and travels to France. Although plagued by a crisis of conscience about acting as a spy, Hornblower carries out his duty. In France, the forged documents are secretly introduced into the French navy's command communiqués. They are subsequently delivered to Admiral Villeneuve, who sorties with the French fleet. Villeneuve's fleet subsequently encounters Nelson's fleet and the resultant combat—known to history as Trafalgar—proves gloriously victorious for the English.

The text also includes two short stories. The first, "Hornblower's Temptation," relates an episode in Hornblower's early career as a junior lieutenant. He is appointed to watch over a condemned man prior to execution. The man attempts to fool Hornblower into delivering a revolutionary message to Ireland, but Hornblower discovers the trick and averts unwitting assistance. The second, "The Last Encounter," relates an episode near the end of Hornblower's life as a retired admiral. His evening at home is interrupted by a traveler requesting assistance. The traveler introduces himself as Napoleon. Hornblower and Brown want to throw him out, but Barbara requests forbearance. Hornblower provides the requested assistance and later realizes the traveler was in fact Napoleon the Third, returning to France from exile in the United Kingdom to engage in national politics.

More summaries and resources for teaching or studying Hornblower During the Crisis.

Hornblower During the Crisis from BookRags. (c)2022 BookRags, Inc. All rights reserved.