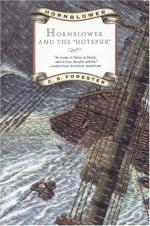 Hornblower and the Hotspur Summary & Study Guide includes comprehensive information and analysis to help you understand the book. This study guide contains the following sections:

This detailed literature summary also contains Topics for Discussion and a Free Quiz on Hornblower and the Hotspur by C. S. Forester.

Newly-married lieutenant Horatio Hornblower, master and commander of HMS Hotspur, leaves England during the last few days of the Peace of Amiens to reconnoiter the disposition of the French fleet anchored at Brest. When war erupts, Hornblower thus possesses considerable knowledge of use to the English. Hotspur then joins the blockading squadron and Hornblower plans, executes several daring shore raids, and weathers severe storms for the course of many months. After these adventures, Hotspur sails to Gibraltar where Hornblower deals with an issue concerning his personal steward. Hornblower then learns his energetic actions have earned him an appointment as post captain. As Hotspur is insufficient for a captain's command, Hornblower leaves his beloved ship and crew at the novel's conclusion.

The novel opens with Hornblower's marriage to Maria Ellen Mason, a woman whom he has known and halfheartedly courted for some time. Hornblower is a lieutenant and has been recently appointed master and commander of Hotspur. Although England is not at war, military leaders believe she soon will be again at war with France. Hotspur is sent to watch French activities at the harbor of Brest. Within weeks, France declares war and Hotspur is joined by a large blockading squadron. Hornblower spends the next approximately thirty months nearly continuously at sea, participating in the blockade of Brest. Meanwhile, Maria gives birth to Hornblower's first child—a boy named after his father.

The novel relates several incidents transpiring during the period of the blockade. Hornblower engages local fishermen for information. He then plans and leads an audacious and dangerous raid deep into French territory. Creeping into the Brest harbor environs at night, Hotspur engages and sinks several coastal mercantile vessels. Hornblower then plans and leads a secondary raid—even more audacious and still more dangerous—against the shore battery and garrison near Brest. Leading his men, Hornblower lands at night in ship's boats, destroys a French signaling semaphore, ruins the battery, and explodes the magazine. Casualties are high, but the mission is entirely successful.

As the conflict prolongs the blockade, duty becomes monotonous but critical. On several occasions, severe weather forces Hotspur from her patrol station. On one occasion, the ship runs dangerously short on water during a prolonged series of gales. Desperate, Hornblower finally sails the ship through full gale conditions to reach the channel and fetch Tor Bay where he resupplies before again being sent to blockade station. On another occasion, Hotspur leads the attack against French transports trying to sneak from Brest under cover of darkness. Finally, Hornblower leads Hotspur against a French frigate to prevent it from warning an approaching Spanish treasure fleet about an English ambush. After this, Hornblower returns to blockading duty for more weary months until the fleet admiral retires. The admiral announces that Hornblower's resolute duty has earned him promotion to captain, and the novel concludes with this happy news.