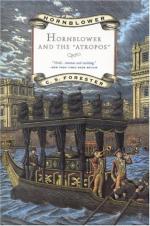 C. S. Forester
This Study Guide consists of approximately 51 pages of chapter summaries, quotes, character analysis, themes, and more - everything you need to sharpen your knowledge of Hornblower and the Atropos.

Hornblower and the Atropos Summary & Study Guide includes comprehensive information and analysis to help you understand the book. This study guide contains the following sections:

This detailed literature summary also contains Topics for Discussion and a Free Quiz on Hornblower and the Atropos by C. S. Forester.

The novel presents a series of episodes in the life of Horatio Hornblower, the protagonist and dominant character. The narrative begins with Hornblower, his pregnant wife Maria, and their infant son taking passage aboard a canal boat traveling from Gloucester to London. Early in the voyage one of the canal boat's two crewmen is incapacitated, and Hornblower volunteers to steer the boat. Maria is distressed that her husband deigns to manual labor, but Hornblower finds the canal boat's operation fascinating. Additionally, he wants to get to London as quickly as possible to take up his new appointment as captain of HMS Atropos. After an interesting voyage, Hornblower arrives in London, sees Maria to a hotel, and assumes command of his ship.

Hornblower's next orders are atypical and surprising. Instead of going to sea, Hornblower is put in charge of the Thames River funeral procession of the national hero, Horatio Nelson. Conferring with various public dignitaries, Hornblower establishes a proper decorum and mood and arranges a series of river barges to transport the massive coffin and the train of mourners. All goes as planned until the barge carrying Nelson's coffin develops a serious leak. Hornblower improvises and alters the ceremony slightly in order to unload the coffin before the barge sinks. Hornblower's quick thinking saves the day and the funeral procession completes without public incident.

Hornblower then takes to the sea but makes it only as far as the Downs before a thick fog rolls in. Atropos anchors among many British merchant ships and waits for the weather to clear. A drifting oar and a distant thud pique Hornblower's curiosity, and a subsequent reconnoiter discovers that a nearby merchant ship has been captured by a French privateer operating in the thick fog. Hornblower quickly arranges a boarding mission, and the French privateer is captured. Hornblower then proceeds to the Mediterranean and joins Collingwood's fleet.

He is instructed to take on a variety of unique supplies and personnel, and then Atropos is dispatched to Marmorice Bay, in Turkey, where she undertakes a prolonged and complicated salvage of HMS Speedwell, a sunken wreck containing a vast sum of monies. The salvage operation is fully described and comprises the major event of the narrative and concludes successfully with a high-stakes escape through a tricky passage, pursued by a much larger Turkish ship. The treasure is returned to Gibraltar and Atropos again cruises the Mediterranean before encountering the much larger Spanish ship Castilla. Joining with HMS Nightingale, Atropos engages and defeats the Spanish ship in a short, but brutal, action. Atropos repairs in Palermo and there catches the eye of the King of Sicily. For diplomatic reasons, the Royal Navy agrees to sell Atropos to the King of Sicily. Removed of command by this act of international goodwill, Hornblower returns to England where he is devastated to find his two children grievously sick with smallpox.

More summaries and resources for teaching or studying Hornblower and the Atropos.

Hornblower and the Atropos from BookRags. (c)2022 BookRags, Inc. All rights reserved.